The family of two-year-old Niranjan Manoj and about 40 members of Native Empowering & Equipping Team for Hope and Interaction (NETHI) on Tuesday staged a protest in front of People Tree Hospital.

BENGALURU: The family of two-year-old Niranjan Manoj and about 40 members of Native Empowering & Equipping Team for Hope and Interaction (NETHI) on Tuesday staged a protest in front of People Tree Hospital in Goreguntepalya over a case of alleged gross medical negligence that rendered a seven-month-old healthy baby disabled in November 2016. 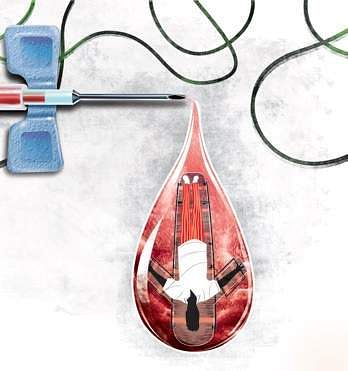 A mistake by a nurse in delivering medicine has allegedly left the child, who is one year and nine months old today, disabled with no hopes of recovery. He was being treated at the People Tree Hospital in Goreguntepalya in November 2016 where a male nurse allegedly injected adrenaline instead of giving it to him to inhale with a nebuliser.

40-year-old Manoj MV, Niranjan’s father told TNIE, “Previously, my son could hold up his head, sit, but now, he can’t do any of that because of the drug the hospital injected mistakenly. He started frothing at the mouth and seizing as soon as that injection was given. We took him to NIMHANS but even they say he can’t get back to his normal self again.”

In his complaint to the Karnataka Medical Council dated February 17 this year, Manoj mentions that further tests at Amrita Institute of Medical Sciences, Kochi, showed there is a blood clot in the brain, epileptic abnormalities and damage to the right eye. “As per the discharge summary of People Tree, the child needed physiotherapy and regular follow-ups,” read the complaint.

Staff nurse Shyma S told TNIE, “There was another staff nurse working with me named Chiranjeet Debnath. The child had breathing problems. On November 29, 2016, at 6 am, he was supposed to be given nebulisation of levolin and thereafter, adrenaline. He finished his first round of nebulisation. I asked Chiranjeet to give adrenaline nebulisation but he gave the ampoule as an intravenous injection.” Both the nurses don’t work at People Tree anymore.

Shyma alleged that she was asked to sign a letter taking full responsibility for the incident and asked to leave the hospital.Dr Supraja Chandrashekhar, paediatric intensivist and director of People Tree Hospital, who was then Niranjan’s treating doctor, did not respond to calls from TNIE.

The hospital claimed that during the course of treatment the child’s condition deteriorated twice, requiring readmission to the ICU. “The team of doctors and nurses who were treating the child are currently not working at People Tree Hospitals.”

Stay up to date on all the latest Bengaluru news with The New Indian Express App. Download now
(Get the news that matters from New Indian Express on WhatsApp. Click this link and hit 'Click to Subscribe'. Follow the instructions after that.)
TAGS
(NETHI medical negligence baby boy