Votes in one of the fastest growing cities, riddled with  infrastructural woes, is crucial to win this polls; With special manifestos and drives, parties are making every effort.

BENGALURU: While Mysuru is hogging the lime light with Chief Minister Siddaramaiah and his son Dr Yatheendra entering the poll battle and BJP’s chief ministerial candidate BS Yeddyurappa’s son BY Vijayendra tipped to take on Yatheendra, Bengaluru too is warming up for the big fight.With 28 Assembly constituencies, city accounts for over 12% of the 224 seats.

The city which remained a ‘Pensioners Paradise’ till early 1980s has seen a huge transformation, thanks to the IT revolution. The resultant boom in economy and population has changed the city’s political landscape too.

“Today most of the candidates fielded by political parties represent one or the other lobbies, such as the real estate lobby, education lobby or mining lobby. We see very few candidates who have emerged from social movements. Political parties are only concerned about preserving their vote banks,” says political analyst Sandeep Shastri.

The city has not been a preserve of any party in the post-emergency era, when the non-Congress parties gained in strength.In the 1980 Lok Sabha election, when Congress won 27 of the 28 Lok Sabha seats in Karnataka, Bangalore South had elected TR Shamanna of Janata Party. The Janata Party and later Janata Dal in alliance with left parties had gained a strong foothold here, under the charismatic leadership of Ramakrishna Hegde and later HD Deve Gowda.

However, infighting and split in Janata Parivar allowed BJP to occupy the anti-Congress political space in the city. The party has emerged as a strong political force here since late 1990s.BJP won 16 of the 28 Assembly segments in 2008 polls, reducing Congress tally to 11, and put up a decent fight in 2013 too when it was routed elsewhere mainly due to the split in the party.

Congress which stormed back into power in 2013, under the leadership of Siddaramaiah, bagged 13 of the 28 seats in Bengaluru, just marginally ahead of BJP’s tally of 12. BJP which could manage just 40 seats in the state scored about 30 per cent of this tally from Bengaluru alone.

The ruling Congress party suffered further embarrassment when BJP emerged victorious in 2015 BBMP polls, but the saffron party was forced to sit in the opposition in the civic body as Congress and JD(S) joined hands to keep BJP out. BJP made a clean sweep of all the 3 seats in Bengaluru in the 2014 Lok Sabha polls.

Why these votes matter

The road to Vidhana Soudha is paved with Bengalureans’ votes, and this reality has forced all the three  contenders--Congress, BJP and JD(S)--to draw up special campaigns for the city.BJP, which was first off the blocks with its ‘Save Bengaluru’ Padayatra in all the 28 constituencies, is buoyed by the response, enough to launch a second phase of the Padayatra.

Congress is not lagging behind as its ‘Namma Bengaluru, Namma Hemme’ Padayatra to counter BJP drew enthusiastic crowds. JD(S), which suffered a set back with defection of its MLAs Zameer Ahmed Khan(Chamarajpet) and Akhanda Srinivasamurthy (Pulikeshi Nagar) to Congress, is determined to consolidate its presence in the city.But, the main fight is expected to be between Congress and BJP in most of the constituencies and “no party is expected to dominate or sweep the polls in Bengaluru,” says Sandeep Shastri.

‘More autonomy for BBMP’
All the three parties are set to bring out exclusive manifestos for Bengaluru, a city creaking under a range of problems. Its notorious traffic congestion, rampant encroachment and pollution of lakes, atrocities against women, drug peddling, rowdy menace in the streets and the alleged assault by Mohammed Harris, son of Congress MLA from Shantinagar, are among the issues that are set to dominate the campaign. “Bengaluru needs a more effective system of governance,” says Kathyayini Chamaraj, a civic analyst. Terming Siddaramaiah government’s aborted move to trifurcate the BBMP as “unnecessary”, Kathyayini says, “such cosmetic measures would only bloat the bureaucracy, worsen the problem of coordination and increase administrative expenditure.” Greater autonomy and accountability for Bruhat Bengaluru Mahanagara Palike (BBMP) with well equipped Metropolitan Planning Committee is the immediate need, she says. “Civic agencies like Bangalore Water Supply and Sewerage Board and Bangalore Electricity Supply Company need to be brought under the supervision of BBMP to ensure better coordination among them.”  It is imperative to encourage greater participation of citizens, particularly with setting up of ward committees, Kathyayini says. 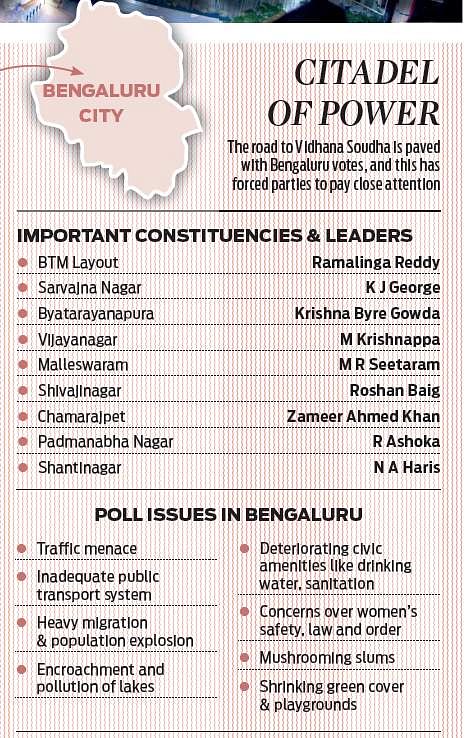 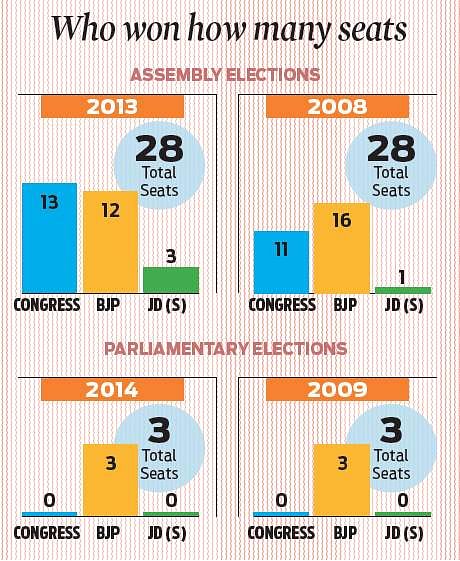 Stay up to date on all the latest Bengaluru news with The New Indian Express App. Download now
(Get the news that matters from New Indian Express on WhatsApp. Click this link and hit 'Click to Subscribe'. Follow the instructions after that.)
TAGS
BBMP Vidhana Soudha Mysuru