Just an year ahead of the 2019 Lok Sabha elections, the debate on a long-pending electoral reform, that a person should be allowed to contest only from one constituency has risen up.

CHENNAI: Just a year ahead of the 2019 Lok Sabha elections, the debate on a long-pending electoral reform, that a person should be allowed to contest only from one constituency has risen up, with the Election Commission of India filing an affidavit before the Supreme Court supporting such a move.
On April 4, the EC filed the affidavit supporting the idea of amending the Representation of People Act (RPI) to make it mandatory that one person contests only in one constituency.

Many leaders, including Indira Gandhi, Atal Bihari Vajpayee, Narendra Modi, Sonia Gandhi and J Jayalalithaa had contested from two constituencies in the past. While many political parties have supported the move, the ruling AIADMK here has opposed the proposal, calling the move undemocratic. Some other leaders have called for arriving at a consensus at the national level before amending the RPI Act.

Subhash C Kashyap, former secretary-general of Lok Sabha, who, as member of the National Commission to Review Working of Constitution made this recommendation way back in 2002, told Express: “This proposal has been around for a long time. It is unfair to allow a person to contest in two constituencies. In case the person wins both constituencies, the person should resign from one and another by-election has to be held. It is unfair to the people of one constituency if the candidate chooses his membership in favour of the other constituency. Secondly, it involves unnecessary cost.” 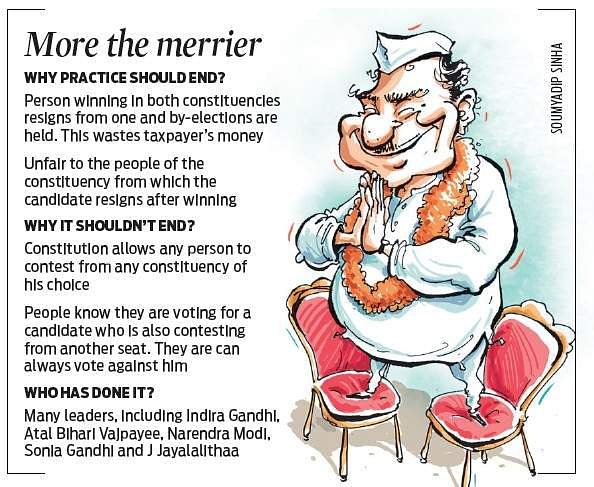 Kashyap recalled that years ago, it was possible for a candidates to contest from several seats and later, it was amended so that one person could contest only from two seats. However, he made a careful remark: “I think it should be considered not in the context of any particular impending election or any particular seat. It should be considered as part of the package of electoral reforms.”

Former Union Minister of State for Commerce and Industry, EM Sudarsana Natchiappan, who had headed the Parliamentary Standing Committee on holding simultaneous elections to Lok Sabha and Assembly constituencies, too concurs. “It is a correct stand. The person contesting in two constituencies does that knowing well that he has to vacate one seat if he wins in both seats. Such a practice unnecessarily disturbs the democratic process by not allowing another person getting elected from the other constituency. The taxpayer’s money is unnecessarily spent,” Natchiappan observes.

He too points out that more electoral reforms, such as State funding of elections, need to be implemented. “This is vital because a candidate from poor economic background cannot take on candidates with money power,” he adds.

‘It’s people’s choice’
However, AIADMK spokesperson Vaigaichelvan has a different view. He says, “Barring a person from contesting in more than one constituency is against democracy. At present, the RPI Act allows a person to contest in more than one constituency and also contest anywhere in the country he/she wishes to. As such, to take a decision against the present procedure, the Election Commission should first elicit the views of all political parties and come to a decision. Further, if the condition that one person can’t contest in more than one constituency is accepted, someone may also come up with a suggestion that one person should contest only in his district. Any Indian can contest elections from anywhere in the country and the number of constituencies he/she wishes to contest should be the person’s choice.”

Political analyst Tharasu Shyam is also sceptical about implementing the ‘one candidate-one constituency’ norm. Pointing out that many big leaders had contested in more than one constituency, he says Pasumpon Muthuramalinga Thevar had always contested in two constituencies — one Assembly and one Parliamentary. He said he was doing so to show that his leader Subhash Chandra Bose had support across the country. Later, Chief Minister J Jayalalithaa had filed nominations from four constituencies and she said she was contesting from different constituencies because she had support of the people across the State.

Asked whether contesting from two constituencies shows the candidate is not confident of winning in one constituency, Shyam says, “It is other way round. It shows the confidence of the candidate. For a Prime Ministerial candidate, contesting in two constituencies forces him to ensure that he wins in both. India is a vast country and only a very few candidates contest in more than one constituency. The spirit of RPI Act gives power to the people and a leader can show that he/she has the love of the people across the country. Makers of our Constitution would have scrapped the option  had they felt it is undemocratic.”

Need more reforms
However, D Ravikumar, general secretary of Viduthalai Chiruthaigal Katchi, welcomed EC’s move saying many more electoral reforms have been put on hold for a long time. “For example, at present, Rajya Sabha MPs are elected from any State. Rajya Sabha MPs are elected by MLAs of State to represent that particular State. So MPs for the Upper House should belong to that specific State. Contrary to this, now people from other States also being elected to the Upper House.” Ravikumar also highlighted the need for another key electoral reform — that only MPs elected by the people should be made Cabinet Ministers, and not Rajya Sabha members.

CPI national secretary D Raja agrees with EC’s move but said a consensus among political parties is must. “Since RPI Act was enacted by the Parliament, this has to be decided only by the Parliament. The EC can’t take a decision unilaterally. Recently, the EC recommended simultaneous elections for Lok Sabha and State Assemblies. This is not in their domain. Parliament should take a final call,” he said.

Stay up to date on all the latest Bengaluru news with The New Indian Express App. Download now
(Get the news that matters from New Indian Express on WhatsApp. Click this link and hit 'Click to Subscribe'. Follow the instructions after that.)
TAGS
Election Commission electoral reform