Sahana Y is a class nine student at the Government Higher Primary School (GHPS) in Police Colony, Magadi Road. For the past two weeks, she and 29 of her classmates, have been busy preparing for a play that they will staged as part of the ‘Giving Every Dream a Chance’, organized by Akshaya Pathra.

BENGALURU: Sahana Y is a class nine student at the Government Higher Primary School (GHPS) in Police Colony, Magadi Road. For the past two weeks, she and 29 of her classmates, have been busy preparing for a play that they will staged as part of the ‘Giving Every Dream a Chance’, organized by Akshaya Pathra.

Aimed at nurturing children with unique dreams, the event will also see school children from 15 other government schools in the city showcasing different talents ranging from cooking, origami, football and math and science. The event is being held on April 14, 6pm at Taj Vivanta, Yeshwanthpur. 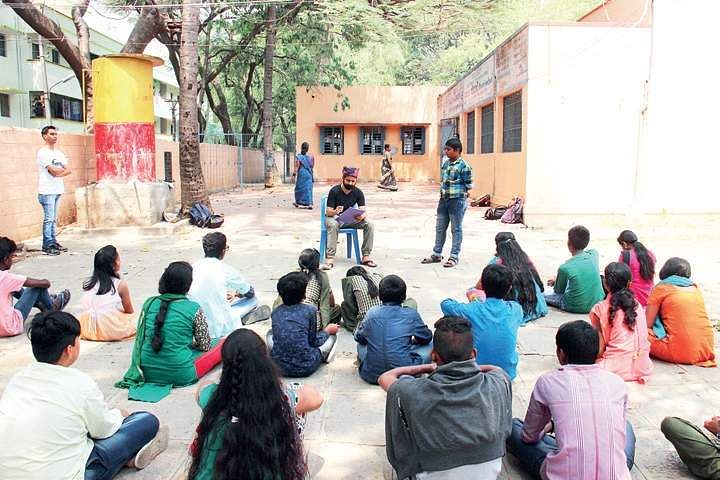 “I always had a wish to learn theatre and drama, but this is the first time I will be doing anything at this scale and on this level. This programme made me realise my hidden talent. We have been getting trained by a professional theatre artist,” says Sahana, who will be playing a teacher in the play.

Ajay Kavishwar, director, PR, Planning and Advocacy, Akshaya Patra Foundation says all the training is being imparted by professionals. For example, six students from GHPS Peenya and Yeshwanthpur have been trained and mentored in cooking by the Chef Selvaraj from Taj Vivanta, Yeshwanthpur. “In fact, there is a two-year course by Taj Vivanta that has been designed to equip a child with the basics if he decides to pursue this line of work,” he adds.

A total of 200 children will be showcasing their various talents. In dance, 15 children from GHS Kadugodi, GHPS Belanthur Colony, GHPS Immadihalli, St.Josephs Whitefield, GHPS Channsandra, have been trained by Spektrum Dance Studio in Whitefield; 16 students of GHPS Mathikere by Sri Raksha Natya Kala Academy and  20 students of GHPS have been trained by High Heels, Koramangala.

In origami, 60 children of GHPS Kodigehalli are trained by Artand. In football, 80 children from GHPS Ramagondanhalli, GHPS Kadugodi and GHPS Triveni Nagar are being trained by Just for Kicks.
Kavishwar adds that the schools were chosen randomly from those that are already under Akshaya Patra. “The interest of the students, as well as the availability of the resources near a particular school, were key to this training programme.”

He adds, “We have been imparting training in three locations in south India — Bengaluru, Hubli and Hyderabad — for the past three months and one in Vrindavan in north India. We plan to make this into a year-round programme,” he adds.