The accused confessed that they wanted to earn easy money.

BENGALURU: The DJ Halli police have arrested a gang of three men for killing an Ola cab driver in the outskirts of the city and robbed him of his car along with other valuables. Rinson Soman (23), a resident of Muninanjappa Block in DJ Halli went missing on March 18. His body was subseqently found a few days later in an open drainage in Hosur. 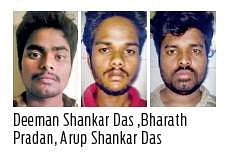 The arrested are identified as Deeman Shankar Das (26), his brother Arup Shankar Das (36), both from Assam, and their friend Bharath Pradan (22), is from Odisha. They had come to the city eight years ago and were working as labourers at construction sites. Later, they turned out to be listed as habitual offenders. Preliminary investigations revealed that they were also involved in a case of kidnapping where they had abducted a businessman, Jantu Das, to demand ransom.When the accused were thoroughly grilled, they told police that they wanted to earn easy money.

During interrogation, the prime accused Deeman revealed to the police that on the night of March 18, they were standing at Veeranapalya near Nagawara road and approached a cab driver to drop them to a location. Then, they came across Soman who was heading towards Hebbal and offered him `1,500 to drop them at Electronics city. They said that they did not know how to use a cab app.

He believed them and agreed to drop them. They took him towards Electronics City and when they were passing by an isolated place, Soman was asked to stop the car as they wanted to attend nature's call. He grew suspicious and did not stop the vehicle. According to their plan, Bharath took out a knife and threatened Soman to stop the car. As he slowed down the vehicle, Arup strangled him using a towel to kill him. They drove his car towards Krishnagiri and on the way, they dumped the body.

Stay up to date on all the latest Bengaluru news with The New Indian Express App. Download now
(Get the news that matters from New Indian Express on WhatsApp. Click this link and hit 'Click to Subscribe'. Follow the instructions after that.)
TAGS
Ola cab driver killed