While campaigns for May 12 elections are rigorously going on by various candidates, the election commission on the other hand too is trying various methods to get maximum participation.

By Sharadhaa A
Express News Service

BENGALURU: We are little less than a month away from Karnataka election. While campaigns for May 12 elections are rigorously going on by various candidates, the election commission on the other hand too is trying various methods to get maximum participation. To ensure 100 per cent voting this time, they have associated with film director Yogaraj Bhat for an election song which got released over the weekend. 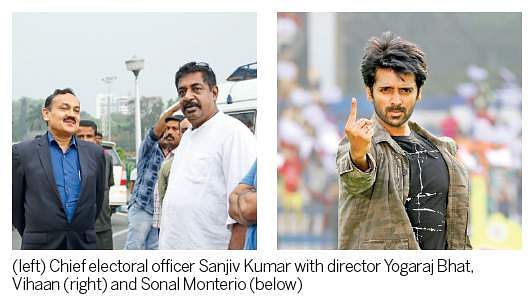 The track music is composed by V Harikrishna and lyrics is by Bhatru. The choreography of the song is by Imran Sardariya. The song features the entire cast of Panchatantra including Vihaan, Sonal Monterio, Akshara Gowda, helmed by the Mungaru Male director. As the track Maadi Maadi Mathadana.. erali deshada mele abhimana released over the last weekend, which has now got good reactions.

In a conversation with City Express, Bhatru says how he feels proud to work with Election Commission. Ask about his initial reaction of doing the election song, he chuckles and says, "I realised soon that the Election Commission is working towards attracting people from all corners to come and vote. Going by their data, 35 per cent votes get wasted and all this tactics are to ensure that this election season, they bring out 100 per cent voting. I also realised though entertainment and politics are two different fields, both its successes and failures depend on its people. The concern and cause of Election Commission is bigger and comes with social responsibility. During the discussion, I realised that they want to be bang on their target while it also creates memorable moment in my career," he says.

He has wooed the Karnataka audience with his colloquial lyrics for the song which has become a chartbuster hit. Bhatru says writing lyrics for an entertainer is different from penning words for a political platform. "The lyrics couldn't be entertaining or too formal or patriotic because it would not serve its purpose then. I tried the in between layer and it has worked out. The motto and brochure are very clear and to an extent, their brochures helped me come up with the right words and so was the case with music director. The lyrics and recording of the song took us two days," he says.

Though the song is released, director Yogaraj Bhat feels that his job is not over yet. "The election commission is bringing different segments like entertainment, sports and politics to reach people. I liked this initiative by them. Their aim is to have 100 per cent voting. So, if this song helps, I will be more than happy to be part of this contribution. From my end, I will be promoting it in the film circle and we will get the stars and various actors from the industry to talk about the importance of voting."

Ask about his inclination towards politics and Yogaraj replies, "I am not a political person at all. I would just like to mention John Kennedy's words here, 'We can neglect politics, but politics will never neglect us,' and he signs off.

Stay up to date on all the latest Bengaluru news with The New Indian Express App. Download now
(Get the news that matters from New Indian Express on WhatsApp. Click this link and hit 'Click to Subscribe'. Follow the instructions after that.)
TAGS
Yogaraj Bhat Bhatru Karnataka election