What if Rumi and Manto were alive today?

Play looks at what would happen if Rumi, the SRK of social media, and Manto, an outcast, run into each other

BENGALURU: Diametrically opposite personalities, both critically acclaimed in their own time and literary icons of today, author Saadat Manto meets Persian poet Rumi at a modern day literary fest in Mumbai. The 80-minute solo play by Mumbai-based actor and stand up comedian Mohit Sharma, will be performed in Hindustani (a mix of Hindi and Urdu). This is an attempt to get into the minds of both the thinkers and guess what their take on current world issues would be. 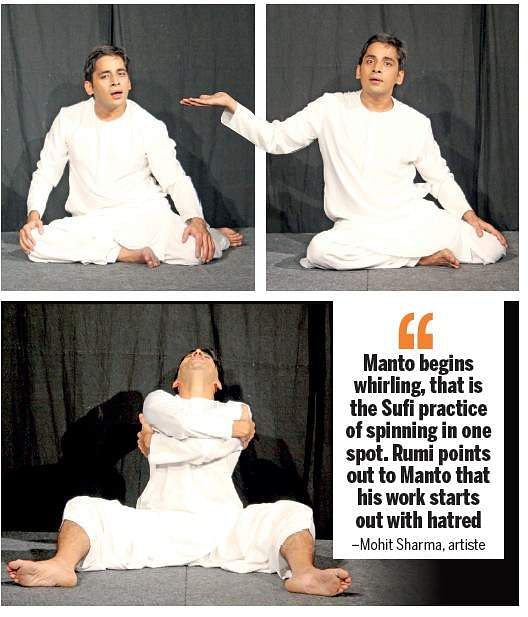 “The play has a comic and sarcastic look at society. As we know, Rumi was a forgiving, accepting and spiritual individual while Manto was angst-ridden and wrote the blatant truth about outcastes like prostitutes. He was famous for his books on the Indo-Pak partition,” says Mohit Sharma, further adding,” The current generation is euphoric about the two thinkers, as we can see them doing the rounds on social media. The two are like chalk and cheese; who in the play, meet and talk about issues like Kashmir, Gaza, US airstrikes on Syria, Game of Thrones, and Uncle Sam.”When asked if the two people get into an ideological argument, Sharma says no. They in fact, rub off on each other.

“Manto begins whirling, that is the Sufi practice of spinning in one spot. Rumi points out to Manto that his work starts out with hatred and shows society’s evils but eventually trickles down to love, by trying to find the humanity in the prostitute or criminal,” Sharma narrates, adding that Manto also rubs off on Rumi.
In the play, the 12th century middle eastern poet admits to the British India era writer, that we need all kinds of people in the world: be it fools or intellectuals. If all humans are the same, they would look like graves, Rumi admits in the play.

“Artists always paint, write or perform with only themselves in mind. The audience is always left guessing about the artist’s thought process. That’s why I thought of getting into the shoes of these two pop icons and portray their opinion of today’s issues and events,” shares the director, writer and actor of the play.
Mohit Sharma will be performing the play with a mix of Rumi’s poetry and Manto’s textual narrative  at Atta Galatta on April 21 and 22 at 5 and 7 pm respectively.