Excise department says the stores are supplied with stocks to last for a shorter period to prevent misuse during polls.

BENGALURU: Some citizens are buying liquor in large quantities and hoarding it after rumours spread about the liquor stores going dry due to the Election Commission’s model code of conduct. Liquor store managers also say there is a shortage of liquor being supplied, which is not meeting customers' demands. However, the excise department has maintained that liquor supply is as per the norms, with the difference being that stores are now supplied with stocks to last for shorter durations as a measure to prevent misuse, which has been perceived as shortage by the stores.

Sahil Sharma (name changed) saw that many liquor stores had shut down in Malleswaram and Rajajinagar, and even those which were open were low on stock and were planning to shut down until elections are over. "I thought I might not get liquor in these areas until the elections, so I purchased a lot of it.

A friend of mine too did the same," Sharma said. Staff members at some liquor stores in Bengaluru said there was a shortage in supply. In addition, liquor stores, afraid of coming under the excise department's radar, are enforcing rules which they usually do not follow. For instance, a bar in Koramangala and one in Ashok Nagar used to serve liquor in the store itself, but have stopped it now. The office bearer of the Karnataka Federation of Wine Merchants Association added that lot of bars were being shut by the excise officials over petty issues citing violation of rules which are too stringent to be realistically implemented. 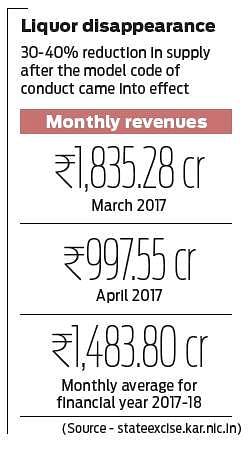 As the excise department has issued an instruction to not allow liquor outlets to purchase more than 20 per cent of what they had purchased in April 2017, the supply is turning out to be insufficient. The excise department's records of monthly revenues show that every year, the lowest revenues are generated in the month of April as outlets tend to stock up in March.

An official of the excise department said there was no overall reduction in the quantity of liquor being supplied, instead, outlets were not being allowed to stock up and were being supplied liquor to last only a few days. The official said it was the retailers' perception that there is a shortage. "Even retailers do not want to sell more as they think they might then come under the department's radar. Already, 750 outlets have been shut down, who wants to be 751st?" the official said.