The Bruhat Bengaluru Mahanagara Palike’s war on illegal flexes, banners and hoardings across the city, which comes on the back of prodding by the high court, drew first blood on Thursday. 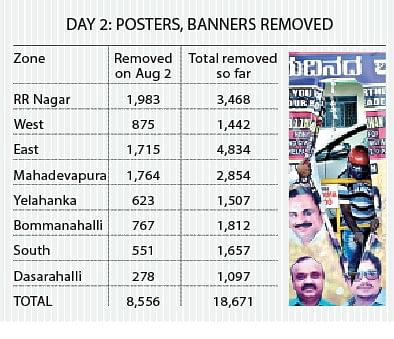 BENGALURU: The Bruhat Bengaluru Mahanagara Palike’s war on illegal flexes, banners and hoardings across the city, which comes on the back of prodding by the high court, drew first blood on Thursday with a mob assaulting a BBMP assistant revenue officer who was with a group of BBMP workers removing illegal posters.BBMP commissioner N Manjunatha Prasad told The New Indian Express that when the ARO of HAL sub-division, Bhadrachar, went to remove flexes along with a group of BBMP workers, all of a sudden, more than 40 people arrived there demanding that the drive be stopped. When the BBMP men did not, they were manhandled. Bhadrachar stepped in to protect his men, but was assaulted by the mob. He sustained two grievous wounds on his back. The incident occurred near Tin Factory opposite Honda showroom in Ramamurthy Nagar.

“When our assistant revenue officer tried stopping them, he was assaulted and beaten up,” Prasad said. Ramamurthy Nagar police have detained two from among the mob and a case has been filed.In fact, on Wednesday morning, following the High Court taking exception to the manner in which illegal flexes, banners and hoardings had come up all over the city, Prasad had strictly ordered his men to take them all down by afternoon, and had said that criminal action will be taken against anyone trying to obstruct the work.

Some BBMP officials feel that the attackers may have been supporters of local MLA Byrathi Basavaraj as the flexes and banners being taken down had his photographs. But Mayor Sampath Raj has denied any political interference and has assured that from Friday, policemen will accompany the BBMP teams to ensure that the High Court-set deadline of one week to bring down all the illegal banners, hoardings and flexes is respected. Meanwhile, the BBMP authorities, in two days, have removed 18,671 flexes, banners and hoardings including 8,556 on Thursday in all eight BBMP zones. Various teams from each zone are removing illegal posters.