The drive which started on Saturday afternoon has now left close to 1,500 people homeless, according to eyewitnesses.

BENGALURU: A demolition drive undertaken to remove around 400 sheds that had allegedly come upon a privately owned land near the Sakra World Hospital went “horribly wrong” according to the residents.
They alleged that the Bruhat Bengaluru Mahanagara Palike (BBMP) demolished sheds and hutments which had been in existence there for the past eight years, and without any advance notice. The demolition took place in a vacant spot behind a Mantri Developers apartment block at Kariyammana Agrahara in Bellandur. 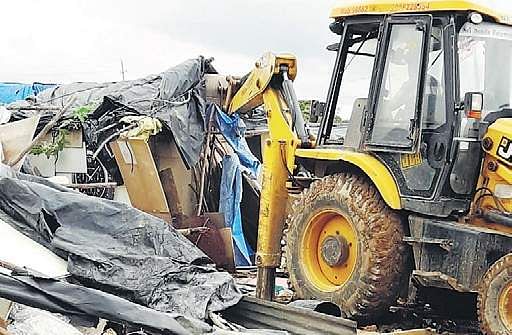 The drive which started on Saturday afternoon has now left close to 1,500 people homeless, according to eyewitnesses. Most of the residents work as security guards, domestic helps and waste pickers and hail from states like Assam, West Bengal and Uttar Pradesh.

According to them, they were given no reason as to why their houses were demolished. “We were told that the remaining houses in the property will be demolished tomorrow (Sunday) morning,” a resident said.
According to BBMP officials, several warnings had been given to the residents as they were living as squatters on the private land. “There were enough announcements asking them to vacate the spot before demolition was taken up on Saturday. We made every effort to warn them before the drive on Saturday,” a senior BBMP official said.

“We have to follow the law and have tried to be as compassionate as possible in giving the people advance warning,” the official added.

Now we are on Telegram too. Follow us for updates
TAGS
BBMP Bengaluru demolition drive