The decision to take up the works came after a road caved in opposite Cottonpet police station on Saturday morning.

BENGALURU:  Bruhat Bengaluru Mahanagara Palike (BBMP) has planned to undertake white topping and TenderSure works on the congested Cottonpet Road, threatening to hit traffic movement for months after the work commences. Cottonpet Road, which is narrow and congested, is the arterial link from West Bengaluru to South Bengaluru. Keeping the road closed will see traffic forced to take massive diversions to reach places in South Bengaluru. 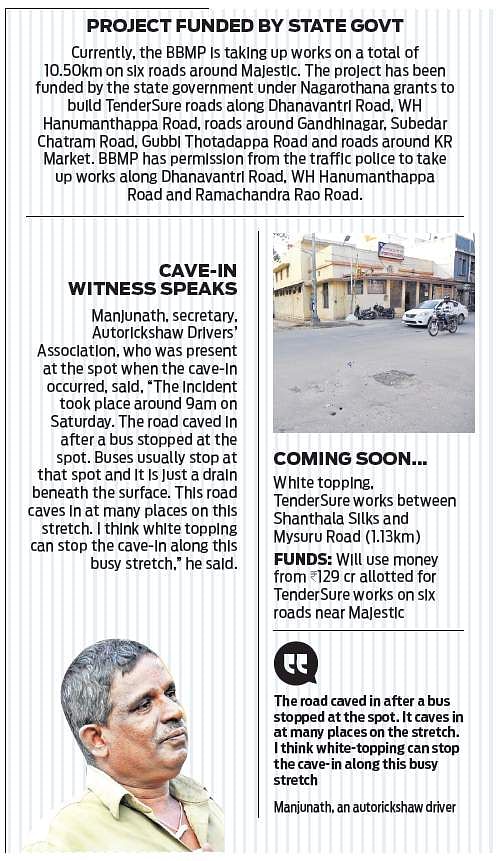 The decision to take up the works came after a road caved in opposite Cottonpet police station on Saturday morning. This led to traffic chaos and loss of business to several angry traders who demanded that BBMP solve the problem at the earliest.

With that as the trigger, BBMP has now decided to take up white topping and TenderSure works between Shanthala Silks and Mysuru Road (1.13km). According to BBMP, the work will be taken up under the package of ongoing TenderSure works on six roads surrounding Majestic area at a cost of `129 crore. BBMP will take up the works using the same funds.

K T Nagaraj, chief engineer, project central, BBMP, told the The New Indian Express: “The road caved in due to ongoing stormwater drain works. The work is currently going on and the surface was weak.

We have attended to the problem and have decided to take up white topping between Shanthala Silks and Mysuru Road for 1.13km so the problem will not happen again. The road will also have TenderSure footpaths. We will start the work once the SWD department of BBMP completes its work. The work will be taken up under the sanctions of the package under TenderSure.”

However, Sajjan Raj Mehta, trader and activist in the area, said, “The BBMP is rushing to take up white topping work. The work has not been a good one on BVK Iyengar Road. Also, Cottonpet Road is a major road that connects South and West Bengaluru. If white topping is taken up, it will create huge traffic jams and can make travelling around Majestic miserable for months. We only want better roads that can allow us to have a decent commute.”

Srinivas Alavilli, member of Citizens for Bengaluru (CfB), said, “The BBMP should study the actual problem first and then decide what should be done. Of course, the safety of public should be the priority, but one can’t believe that white topping is the solution for all potholes and cave-ins. There are many white-topped roads that have not served the purpose.

We need to understand the capacity of this project. BBMP should consult the public before rushing in on any project.” M N Sreehari, a traffic expert and former advisor to the state government on traffic issues, said, “White topping takes more time as BBMP has not adopted proper technology to ensure that concrete dries faster. The moisturiser in concrete does not dry quickly, and that restricts traffic movement.”

Now we are on Telegram too. Follow us for updates
TAGS
BBMP Cottonpet