This includes cess of 20 paise per litre of diesel, PRR tax on buildings, IT&BT cess from industries.

BENGALURU: The Bangalore Development Authority (BDA) has proposed three taxes to fund the Peripheral Ring Road project — a cess of 20 paise per litre on diesel in the city, a PRR tax on buildings within BBMP limits and an IT and BT cess from industries for a five-year period. The proposal has been submitted recently to the state government for approval.

The report — Strategy for Project Financing — submitted by the Special Purpose Vehicle formed to implement the project, which looks at mobilising resources for the Rs 11,950 crore project, says, “Consumption of petrol and diesel in Bengaluru is of the order of 70,000 kilo litres per month. A nominal cess of 20 paise per litre can be imposed which will help in generating a revenue of Rs 35 crore per annum.” The cess will help in generating Rs 175 crore over a five year period, it added.

The 65.5-km eight-lane project, conceived 11 years ago, is aimed at decongesting Bengaluru city and proposes to provide seamless connectivity to major IT hubs and residential areas including Electronics City, Sarjapur, Varthur, Whitefield, Hoskote and Bengaluru International Airport. The implementation cost, according to the document, works out to Rs 185 crore per km. Due to paucity of funds at its disposal, the land acquisition cost could never be met and the BDA tried different strategies for it. It had called for a global Swiss challenge method of tendering, but got no responses. It had tried to get the National Highways of Authority to fund it too, but it did not show any inclination to carry out the project.
An attempt to include it under the Prime Minister’s ‘Bharatmala’ scheme for infrastructure projects too has not borne fruit.

The proposal by BDA has also called for the imposition of an annual PRR tax for buildings falling under BBMP area in order to generate Rs 750 crore in five years.“The PRR will save substantial time and fuel for citizens in BBMP area. Nominal annual building tax proportionate to the area owned by individual owners may be imposed,” he said. A law needs to be enacted in this connection by the Karnataka government, the report recommended.

Another major move proposed is to impose a goodwill amount on IT and BT companies and industries in BMRDA limits. “A nominal goodwill amount of Rs 150 crore per annum can be charged over a five-year period,” it said. This will also help get Rs 750 crore.

Imposition of an additional 0.25% Stamp duty and property registration charges within Bengaluru Metropolitan Regional Development Authority limits has also been mooted.“Revenue generated in five years will be Rs 400 crore,” it said.  Cess on townships developed within a 2 to 3km corridor on either side of PRR to generate Rs 300 crore has also been proposed. 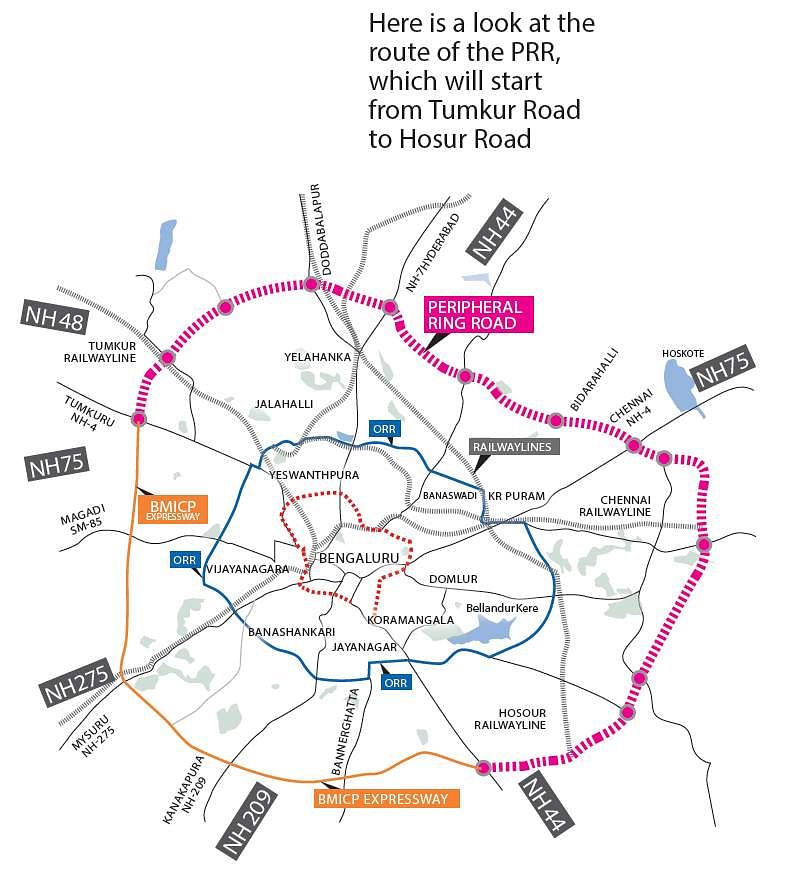