City turns into a fortress as revellers party hard outdoors

The city had turned into a fortress this New Year’s Eve as 15,000 police personnel stood guard to ensure that there was no room for untoward incidents, even as revellers hit Brigade Road, Church Stree

BENGALURU: The city had turned into a fortress this New Year’s Eve as 15,000 police personnel stood guard to ensure that there was no room for untoward incidents, even as revellers hit Brigade Road, Church Street and MG Road in huge numbers. 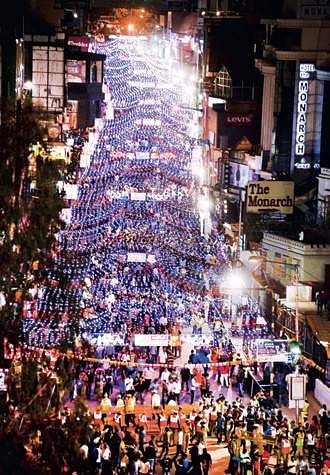 With unconfirmed reports of mass molestation doing the rounds on the New Year’s Eve last year, the City Police had taken extra care. Barricades were put up at many places to deal with untoward incidents.
Speaking to Express, a police official said, “The barricades have been put up so that in case there is an untoward incident, women and senior citizens can be taken to safety on one side of the road.”
Along with the existing 1,500 CCTV cameras, an additional 500 CCTV cameras were installed across the city and 300 CCTV cameras were specifically installed at Brigade Road, MG Road and Church Street to keep a watch on those hitting the Central Business District’s party hub.

On Brigade Road, while people poured on to the streets with pubs over crowded, the police did not let people gather at a spot for long and they were constantly disbursed.Following the unconfirmed reports of mass molestation, the women crowd was comparatively thin this year. It was evident on Brigade Road, despite the deployment of extra policemen.

The pavement on Brigade Road was marked to be a family zone and individual revellers were not allowed to step in here. The police said that this was done to ensure safety.The city police on social media had a busy day. Including retweets, police tweeted 35 times (by 9pm) in a day, which is probably the highest by BCP in a single day this year. A video of Home Minister Ramalinga Reddy was also tweeted, asking people to celebrate responsibly.