He braved penury for music

When Pandit Ananth Bhagwath, Hindustani classical vocalist, came to Bengaluru with his wife and four months old son, no one in his hometown approved his decision.

BENGALURU: When Pandit Ananth Bhagwath, Hindustani classical vocalist, came to Bengaluru with his wife and four months old son, no one in his hometown approved his decision. They said he cannot make a living out of it if he takes up music as his profession. But he was a determined to follow his passion. 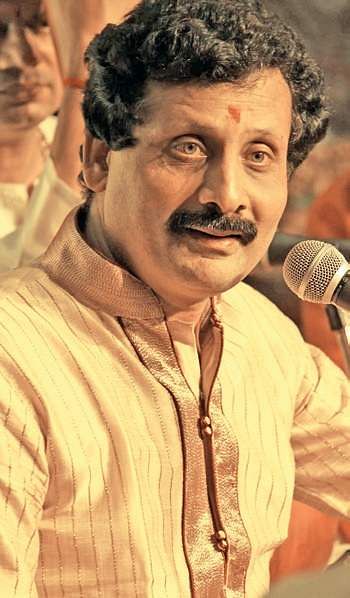 His family has been of immense support throughout his career. His wife Mahadevi, who has also taken Hindustani classical training from Ananth Bhagwat, trains his students. His son Srinivas who is pursuing engineering is also undergoing Hindustani classical music training from him.Ananth started his career as a music teacher at Jyothi School in the city in 1995. He worked there for two years. “But after two years, I realised I am not able to pay much attention to riyaaz and gave up the role,” he says. He adds, “My father and brother were popular Yakshagaana artists but I picked up music as my area of interest.”

After he quit as a music teacher, he had to approach few temples and sabhas to build contacts and establish himself as a musician. He was then successful in getting few concerts. He reminisces accompanying his guru Pandit Parameshwar Hegde to concerts and playing the harmonium. “Accompanying my guruji was very enjoyable, but later building my own career was a difficult task and demanded lot of effort,” adds Ananth.

The ‘B’ grade vocalist in All India Radio started learning music from his elder sister Nagaveni when he was fifteen years old. Later on, he continued his music lessons from his music teachers at school Pandit Lata Udugone and Vidwat lessons from Pandit Arati Asundi. But after taking vidwat lessons, he felt the need to concentrate on his gaayaki. His focus shifted from acquiring theoretical knowledge to ways of singing eloquently. He was in search of a guru and he found Pandit Parameshwar Hegde.

Apart from rendering concerts, he also teaches students at his house. Named Sri Rama Bhaktaanugraha Hindustani Sangeeta Vidyalaya, the institute has trained many students. He has designed a syllabus for his students that start with Alankaara (swaras and aalaaps) followed by a particular raag. “Until and unless a student does not perfect these alankaras, I will not start any lessons pertaining to raagas. I conduct classes with nominal fees. I don’t believe in teaching students and making a profit out of it,” he says. He makes sure that every student in his class is given an opportunity to showcase his singing talent on a platform. Recently, he composed 60 songs in 60 different ragas of Aralu Mallige Parthasaarathi’s compositions. He gave 60 students the opportunity to perform individually on stage. “The concert was a successful one,” he says.

He feels that every musician must practise music, have devotion towards guru and concentrate on the art he learns and be honest. He feels his Guru Pournima performance that he rendered every year as a student of Pandit Parameshwar Hegde is the most memorable one. “Performing at temples such as Sringeri and Kolluru gives me utmost satisfaction as it creates a special bonding between me and God,” he says.

He has composed music, directed and performed Bhagavadgita recitations and bhajans during Gita discourses conducted by Swami Sukhabodhananda all over India, which was telecast regularly in Astha Channel and Sanskar Channel. He has performed at the Alva’s vishwa Nudisiri Virasat-2013.
He also has audio cassettes and CDs of bhajans to his credit. He has performed jugalbandi with famous Carnatic vocalists and instrumental artists and performed in USA as an accompanying artist on harmonium for Pandit Parameshwar Hegde.

He’s been recently awarded with Kanaka Prabhe from Bharatha Samskrithi Pratishtana.” He is doing a concert at ‘Our School’ premises, Banashankari on January 28 at 4 pm. Sri Sadguru Music Academy is organising his concert.