State-run shelter homes, for destitutes and rescued, are poorly equipped and staffed; Inmates are treated like criminals, say activists, with no freedom to discharge themselves

BENGALURU:When the 26-year-old survivor of a brutal gang rape in Avadadevanahalli in Anekal was to be transferred to the state shelter home, after her treatment at Bowring and Lady Curzon Hospital, doctors and human-rights activists protested. The only state shelter home in the city, near Kidwai Hospital on Dr M H Mariagowda Road, is poorly equipped, they said.

State homes are worse than detention centres or prisons, they tell CE. State runs two centres for the rescued, one is the reception centre and the other is a state home. Both are poorly staffed and lack in infrastructure and maintenance.Karnataka State Women's Commission monitors the homes, and its chairperson Nagalakshmi Bai agrees that these homes are shortstaffed and poorly kept. Nagalakshmi says, "The CCTV cameras are also not working. I have written a letter to the Ministry of Women and Child Welfare after my visit, about 20 days ago, but got no response from them," she adds. When City Express contacted Umashree, Minister for Women and Child Welfare, she was not available to comment.

CE team visited the shelter home to check the facilities provided. Despite getting a clearance from the state women’s commission, we were not allowed entry into the rooms.The inmates there are just breathing, says Kavita Srinivasan, member of People's Union for Civil Liberties (PUCL). "I have visited state homes in about eight districts and observed many lapses. The government says they have provided eight different homes for children, but I have seen them housed with adults in one place.” She says that the residents have gone through various kinds of trauma, from sexual assault to coping with mental illness, and that the homes are meant to help them heal. “But often they are not given the time necessary for that, instead they are asked to do the chores,” she says.

The staff are overworked with two permanent employees and four contracted ones, taking care of 80 physically and mentally challenged children and around 40 women, according to Kavita’s estimate.
A group of activists and lawyers have been filing complaints with the state women's commission, along with a detailed report on the poor facilities at these homes, but they have not received any response yet.

‘Families have to rescue them’

Maitreyi K, Manthan Law, says that residents of these homes are not given the freedom to move or express. Dr Sylvia Karpagam, public health doctor and researcher, says, "They say only a family member can come and take an occupant back. There are many women from North India, who have migrated to the city and find it difficult to leave the shelter because of they do not speak the language or are from a family that cannot afford a ticket to this city, to release her." There are women who have been living there for three to 18 years, she says.

"There is a woman from Guwahati. Her brother cannot afford a ticket to come and pick her up. She's in her early 40s and has been living there for more than four years. Access to phones is also restricted," she shares. State women’s commission’s Nagalakshmi says, “Most inmates are undergoing treatment for a mental illness, so we cannot let them leave till they recover”.

There are people who have lost all contact with their homes because of inefficiency on part of the homes, says Maitreyi. She shares the case of an eight-year-old boy who speaks Tamil and had been giving his address and details about his family. "They said no one at the home knows Tamil to help translate. Now, he does not remember his home address anymore," she says. Officials at the state women’s commission say that any resource, like that of hiring a translator, is the responsibility of Deputy Directors of Women and Child Development. They say that they only “monitor” the running of the shelter home, but they are not aware of this lapse that happened with this eight-year-old.

People here are treated like criminals, Dr Sylvia says. "When we go, everyone pleads with us to take them away." The inmates, even those above 18 years, are not allowed any freedom, even to step out of the premises. “Why does a family member have to come to take her back?” says Maitreyi, adding that an inmate an take his or her own decisions. She adds, “This detention is strictly in violation of fundamental rights. Only people accused of crime can be detained… they are not provided any legal assistance either”.

Kavita adds that the people in these shelter homes are outsourced to different NGOs. With the fund of about four lakh a year, they cannot take more than eight people. "But you see about 15 to 20 people living in small rooms in a building with poor accessibility and hygiene. This leads to an increase in the number of cases of mental illnesses… It should be the state's responsibility to take care of them," she says adding a regular audit of the homes is a must. 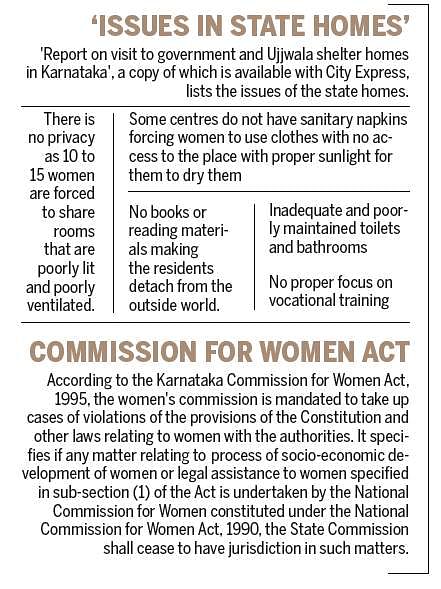