BENGALURU: The carefree and blissful life of a kindergarten kid is what almost everyone envies, but unfortunately, today’s scenario is completely different - competition to score good marks, win prizes and the pressure of being the best has crept into the lives of these kids, who are not even five years old.
Playschools expect these tiny tots to create models of jungles, farmlands, the solar system, dog kennels or horse stables, beaches and more.

Is it possible for a child who is in LKG or UKG to do this without anyone’s assistance? Parent’s say that it is impossible for their little ones to do it alone, or help them with the projects. But parents who are working call such projects ‘burden’ as they don’t have time to spare given their busy schedule, and as a result, they assign it to project makers who give them ready made models by the end of the day.

Chetan KS, a techie, says, “My daughter, who is just three-and-a-half-year-old was asked to make a model demonstrating different types of energy. She barely knows the meaning of energy. As my wife and I are working, we didn’t have time to do it, and moreover, the submission was just two days away. So I got the project done by Sukant Projects by paying `200."According to him, schools these days indirectly ask parents to do the entire project work because the child is very small to do it.

Porrnashree studies at Brooklands Preschool. The four-year old was asked to make a solar system and a model showing different seasons. As both her parents are working, her aunt had to take it up, and she got it done from a project maker by paying `150 for each project. 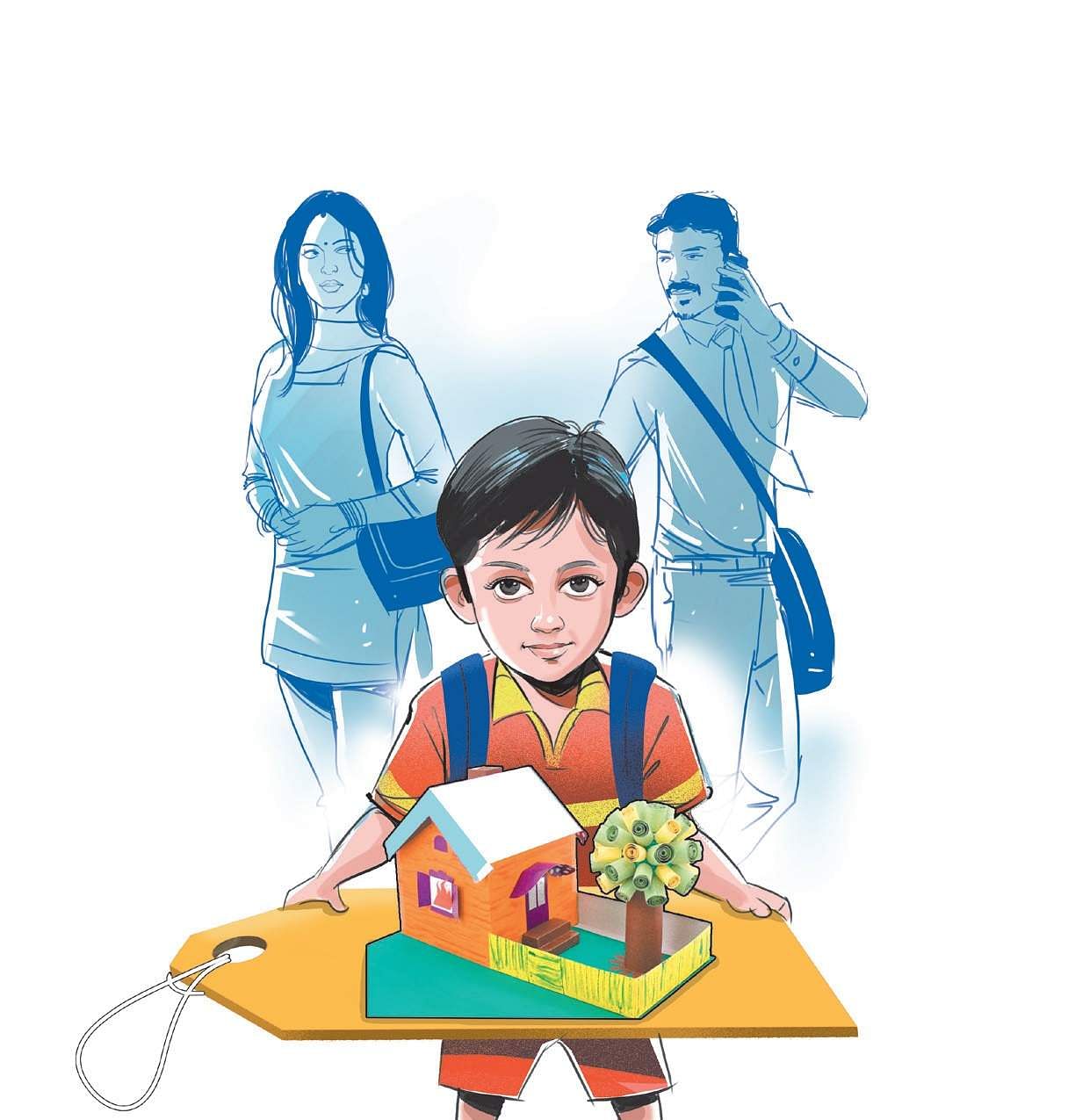 She says she was shocked when she heard about such complex projects being given to her niece and she even wanted to question school authorities. But fearing deduction in marks, she had to keep quiet. She says, "No doubt that the world is competitive, but schools need to understand that these children are incapable of such activities."

She suggests, "If such projects are done within the classroom under a teacher’s supervision, the child will be able to understand and learn something new and creative. By looking at their peers, kids will be self-motivated.”

Minakshi’s son, who is in UKG, was asked to make a model of the solar energy and natural calamities.  She says, “These topics are not age-appropriate, and I can’t help my son either as I am not good at doing such things. Though my husband has enough technical knowledge, he doesn’t have time.”  Minakshi was fed up of these projects and finally found the website to city-based Sukant Projects, which deals with engineering and school projects. The project is delivered at her doorstep, and she spends about Rs. 400 on getting readymade models. When asked whether the teachers enquire as to who did the project, she says that she makes sure her son has memorized certain points and instructs the child to say that the project was made by him and his parents.

Parents need to chip in: Schools

Most school authorities say that the purpose of such projects is to enhance the understanding of the child and to strengthen the bond between parents and children. They deny the projects assigned being too complicated.

Ritu, coordinator, Euro Kids, Jayamahal branch, says,” We give projects that the child is capable of doing. We also don’t accept models that have zero contribution from the child’s end.” However, when CE mentioned that few parents outsource projects, she rubbished such allegations.

The principal at Brookland says, "We give projects the child can do with parents' assistance, and we don’t entertain projects done by outsiders.” When CE brought to her notice that one of the parents was unhappy with the complex projects, she says that parents need to come and talk to the school, as they've never heard such complaints."

Commenting on projects becoming a burden on working parents, Ameena Imtiyaz, principal of Wizkids International, says, “Teachers can’t take care of everything. Schools will definitely teach children and aim for their overall development, but parents can’t escape by saying they are busy minting money. Homemaker or working parent, at least an hour should be taken out to help the child with their school activities.”

Sushmitha Sanyal, principal, Bright Kids Playschool, says, "Many times, children present beautiful projects but they fail to understand the concept. Parents don’t involve them while making the project, thus underestimating the child. To discourage this, we promote activity-based learning as through such activities, the child gains experience.”

Kala Balasubramanian, a child psychologist, suggests that schools need to assign age-appropriate and skill enhancing education. The aim has to be to increase the educative quotient of the child by exposing them to content that can be understood at the right age. The grading system has to be stopped by schools, as because of this, parents feel pressurised and don’t involve the kids in doing the projects.
Kala says, "Parents should understand that they are bringing up the next generation of citizens. How ever busy they are, it is important for them to personally nurture their activities. By assigning projects to outsiders, they weaken the development of the child, and later, it will boomerang. The child knows that the parents doesn't want him/her to get less marks. So they will not mind in getting their work done by an outsider by paying a small amount.”

Sukant Kumar Behera, owner of Sukant Projects Laboratory Pvt Ltd, says, “We manufacture science and engineering projects, but for the last 3-4 years, parents come to us for kindergarten projects where a child is supposed to make models they can't understand. Now, as both parents are working, they rely on project-making companies by paying `300-2,000. He adds, “Due to this, kids are not able to learn about the materials or the concept.” According to him, the reason behind these complex projects is the growing competition among schools. Management and teachers suggest complicated models only for publicity, as such things attract new admissions.