At Rs 112 crore, it was a fine year for Bengaluru traffic police

The city, which annually sees some of the highest amounts of traffic violations recorded across India, saw a total of 1.01 crore cases till the end of last year.

BENGALURU: Traffic rules violators in the city paid an average of Rs 51,317 in fines every minute throughout 2017. The fine amount added `112.38 crore to the coffers of the State Government. This is a straight increase of 60% over the amount of fines collected in 2016, figures from the Bengaluru Traffic Police show.

The city, which annually sees some of the highest amounts of traffic violations recorded across India, saw a total of 1.01 crore cases till the end of last year. This figure stood at 91.8 lakh cases in 2016, an increase of 9%. According to the police, an increase in traffic towing charges led to the surge in fine collection despite the relatively moderate increase in the number of cases filed.

A look at the list of violations recorded by the police places wrong parking at the top of the list with 21.36 lakh cases recorded. Towing charges collected this year increased seven-fold compared to 2016 netting `21.34 crore to the police. The hike in charges also led to the amount being collected in 2017 being higher than the cumulative charges collected for the past ten years as 2.7 lakh vehicles were towed in 2017.

Automated cases, which the BTP has been pushing for these past few years, however, saw a dip and figures for 2017 at 3.02 lakh cases are the lowest in the past three years. In 2016, 4.88 lakh cases had been registered through automated enforcement mechanisms like traffic cameras.

With two-wheelers constituting almost 70% of the city’s vehicle population, it is perhaps no surprise that they continue to be the biggest contributors to the number of violations. Around 61.9% of the total cases filed during 2017 were against two-wheeler riders.
As many as 37.18 lakh cases were filed for riders and pillions not wearing helmets. Speaking to Express, Additional Commissioner of Police (Traffic), R Hithendra attributed the rise in fine collection to heightened enforcement of traffic rules in the city. To a question on seven-fold increase in towing charges collected, he said that the number of wrong parking cases was high, resulting in the increase. 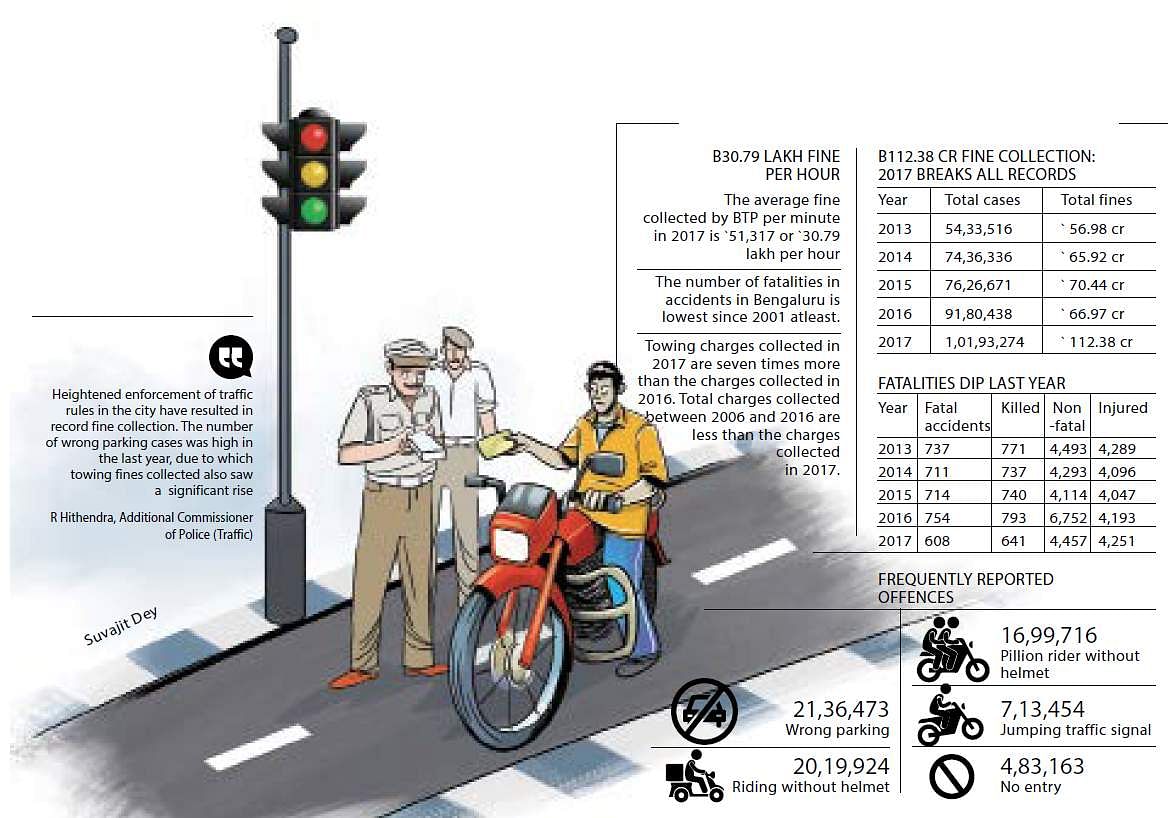