‘Blessed to have- performed with London Philharmonic Orchestra’

BENGALURU: Ace violinist Jyothsna Srikanth, who performed in the city over the weekend, speaks to City Express about her journey — telling us about giving up medicine for music, shifting base to the UK, and visiting eateries in Malleswaram when she is here.

Tell us a bit about your journey.
I grew up in a conservative south Indian environment in Bengaluru. My mother is a south Indian classical vocalist; my grandmother was a veena player. I formally started learning music from the age of five. My mother, Rathna Srikantiah was my first Guru. I was made to listen to many Indian music concerts. During summer time, we had the Ramanavami music festival and my mother saw that I would attend at least 25 concerts. During summer holidays, I was made to practice for five-six hours. My mother had daily targets for me. If I memorised a composition, I would get an ice cream or some bakery product to munch on. 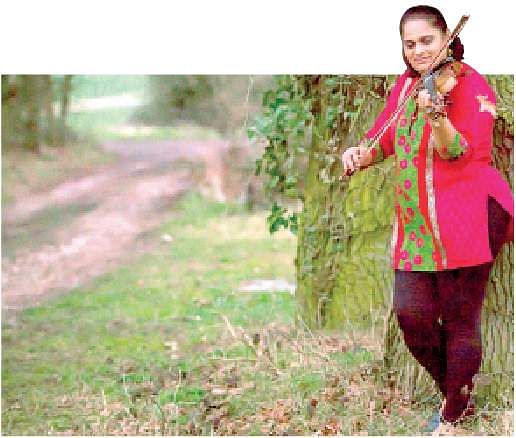 My parents were particular about my academic studies. I got into medicine, studied both MBBS and post graduation in Pathology, practised for 10 years before taking up music completely.
I started learning western classical violin from Bangalore School of Music and later from VS Narasimhan. I had the opportunity to perform with the string orchestra and visiting western classical musicians. This led me to play violin in South Indian films under music directors like Ilaiyaraaja, which gave me exposure to different styles in violin: Indian classical, western classical, Indian folk, film.
My husband got posted to London in 2004. Initially, I was very reluctant to shift to a totally new place as I was established in Bengaluru. Since I had made several visits to London for performances before shifting, I slowly started getting opportunities through my previous contacts.

How was it growing up in a family of musicians?
Listening to music in the family definitely helps. Learning from a guru is 50% and learning by ear is an other 50%.

Was it difficult shifting from Indian classical to Western?
There were many challenges, firstly, the position of holding the violin, in Western style, we need to stand and perform, this balance was a challenge. Next, the tuning of the violin is totally different. Adapting to play to this tuning was a real challenge. Third major challenge was to interpret the western notes as Indian notes in my mind. It took long to get over this confusion — almost 10 years. The one difference between the two is that Indian music is melody-oriented and western is harmony oriented.

You were a doctor up until a few years back. Why did you stop practicing?
By the age of 17, the academics became intense and I got into medicine. Everyone said that I have to give up music for medical studies. But I took it as a challenge and saw to it that my music practice wouldn’t suffer. I practised medicine for 10 years. I felt that I can’t sail in two different boats at the same time. I had to choose any two out of music, medicine and family and so gave up medicine to accommodate the other two.

How different was it collaborating with artistes in the UK as compared to Indian artistes?
Music is the binding force for cultural unity, though there is diversity. Music connects people of different cultures, race and religions. The language of music is unbiased.  A good musician is the same wherever he/she lives. Since I have studied western classical music, I am able to relate to the artists in the west easily.

How did living in Bengaluru shape who you are as a musician?
I grew up in Rajajinagar. In those days, luckily, there weren’t so many TV shows for kids. I used to attend lots of concerts that gave me exposure to music. Bengaluru is a cosmopolitan city, and has always presented music for both classical and contemporary music lovers. I enjoyed performing in traditional areas of Bengaluru like Malleswaram and Jayanagar. The advent of fusion music happened after 1995, until then we were soaked in pure classical music.

Who are some of your influences?
MS Gopalakrishnan and Mysore Nagaraj for Carnatic violin, VS Narasimhan for western violin and Ilaiyaraaja. From the west Ithzak Pearlman for violin, Hans Zimmer and some of the present day artistes like Adele.

What do you miss most about the city?
Old Bengaluru is nostalgic — music was performed to its purest standards. The audiences were definitely more in numbers, though opportunities weren’t as much as today. I miss this musical ambience in Bengaluru. I also make it a point to visit food places of Malleswaram while I am here.

A favourite performance?
I performed with the London Philharmonic Orchestra (LPO) for an audience of 60,000 at Wembley Stadium when our PM visited UK.
It was my dream then to just see LPO perform, and I couldn’t believe that I performed with them as a soloist — I felt truly blessed.

Tell us a bit about Bangalore Dreams.
I formed Bangalore Dreams in 2010. I wanted to reach Indian music to non-classical music lovers. Initially, I called it Fusion Dreams, but after my shift to London, I renamed it Bangalore Dreams, as many tunes were composed due to me becoming nostalgic about Bengaluru. It is music from around the world with Indian influences.

What are your upcoming projects for 2018?
I will be collaborating with She Koyokh, a Romanian gypsy band and Ranagri, a contemporary English folk band. I have been awarded the Women make Music award from PRS, UK, and will be collaborating with the Bollywood Brass band in composing some new music. I am also the artistic director of London International Arts Festival, this year, I will be curating its seventh edition.