The biggest art fair in the state was an even bigger affair this year with 5 lakh people thronging to see some 90,000 art works at the 15th edition of Chitra Santhe; pottery was introduced here for fi

BENGALURU: Kumara Krupa Road near Chief Minister Siddaramaiah’s official residence ‘Krishna’ turned into a no vehicle zone on Sunday and came alive with paintings. With an impressive footfall of at least five lakh, not just from Bengaluru but also from other parts of the state, the 15th edition of Chitra Santhe organised by Karnataka Chitrakala Parishath concluded on a successful note.

At least 1,500 artists displayed their art works from Shivananda Circle to Windsor Manor. The art works including paintings and drawings were sold for anything ranging between `100 and `2 lakh.
The event was inaugurated by scientist and Bharat Ratna awardee Dr C N R Rao. Nearly 90,000 paintings and other art works were up for sale.

This year pottery was a newly added attraction. From children to elderly people, all tried their hand at pottery. Apart from these, art installations and folk dances such as dollu kunitha were major attractions.
A contemporary art form that hogged the light at the event was tie your problems. The installation by artist Arun Kumar Yadav let visitors write their problems on a piece of paper, fold it and tie it by a thread in front of a photograph of Gautam Buddha. 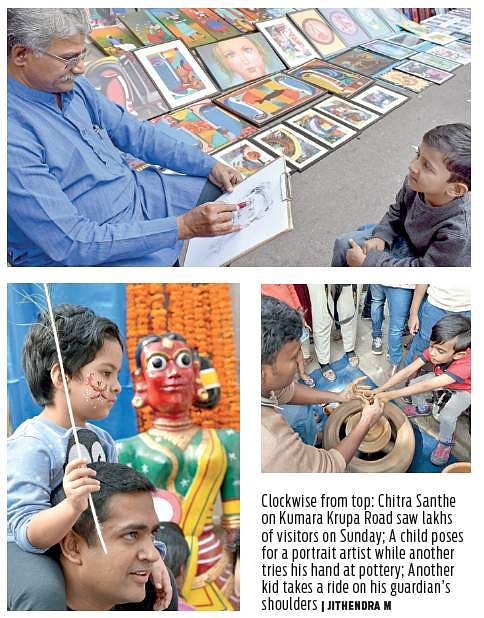