BENGALURU: Uttar Pradesh Chief Minister Yogi Adityanath’s visit to Bengaluru for BJP’s Karnataka Parivartana Rally spawned two separate hashtags on Sunday. While #YogiInBengaluru - used by BJP leaders and others - sought to publicise the events attended by him, #HogappaYogi - trended by Congress leaders - took a dig at the development indicators of Uttar Pradesh and criticised Adityanath.

The hashtag #YogiInBengaluru initially trended with positive posts about the Chief Minister but soon fell prey to trolling and critical posts from Congress leaders. Chief Minister Siddaramaiah too tweeted using the hashtag, saying: “I welcome UP CM Shri @myogiadityanath to our state. There is a lot you can learn from us Sir. When you are here please visit an Indira Canteen & a ration shop. It will help you address the starvation deaths sometimes reported from your state. #YogiInBengaluru”. 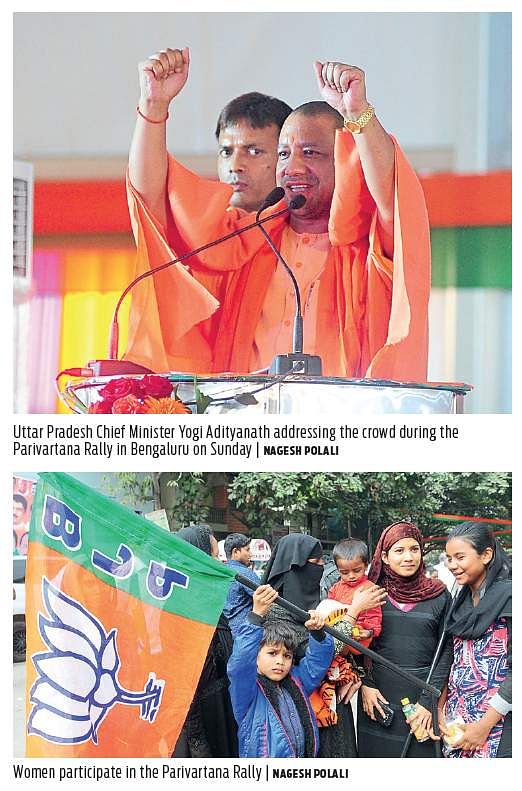 Earlier, Yeddyurappa had tweeted that Siddaramaiah had started speaking about his religion as soon as UP CM came to the state. “If Yogi visits the state a couple more times, it won’t be a surprise if Siddaramaiah chants the ‘Jai Shri Ram’ slogan,” he tweeted in Kannada.

@myogi
adityanath
Thank you for the welcome @siddaramaiah ji. I heard number of farmers committing suicide in Karnataka was highest in your regime, not to mention the numerous deaths and transfer of honest officers. As UP CM I am working to undo the misery and lawlessness unleashed by your allies.

#HogappaYogi
#HogappaYogi, a hashtag inspired by Keralites #PoMoneYogi, trended in third place for most part of Sunday, during Adityanath’s rally. Posts with the tag consisted of memes and comparative graphs of various indicators between Karnataka and Uttar Pradesh. While most of the tweets with the hashtag originated from Congress IT cell, some tweeple too made their presence felt. One of the most discussed photos under the hashtag had Yeddyurappa bowing before Yogi at the rally. Another tweet with the hashtag by Sharat (@re_sharat) read: “In UP he brought Law and Order under control by withdrawing all cases against him!!!! #HogappaYogi”.