‘Beat’ artiste took to mridanga to help out family

Among a few mridanga percussionists in city, Ranjani Venkatesh has accompanied many Carnatic greats in concerts

BENGALURU: A graded artist, Vidhushi Ranjani Venkatesh is among the few top women mridanga percussionists in Bengaluru. She started her musical training more out of necessity, than from passion.
Ranjani comes from a family of musicians --  her mother Vid Saroja and sister Vid Dhanya are Carnatic vocalists, and her maternal grandparents Vid Subhadramma (grandmother) and Vid Venkatappa are violinists. They were then in Bellary and, for her mother’s and sister’s concerts, they had to bring down percussionists from Bengaluru, which was an expensive affair. To help them out, Ranjani’s grandmother encouraged this younger sibling to train in mridangam. 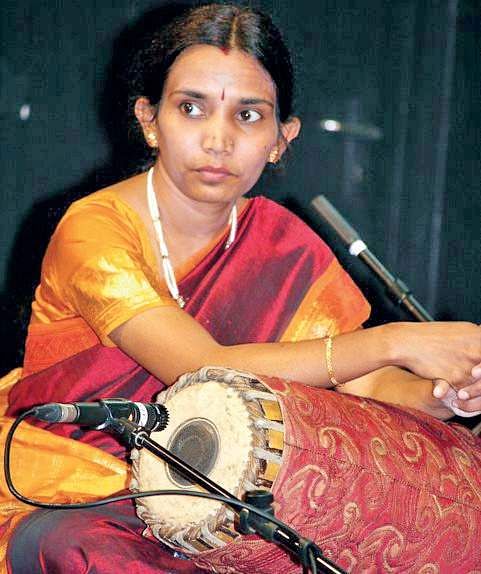 But Ranjani had always shown a talent to follow the rhythm. “When I was a baby, my grandfather sat me on his lap while teaching his students. He noticed that I shook my leg according to the rhythm, even when the class switched between three different beats. He had told my mother that I should be introduced to classical music,” she says. It was Ranjani’s father, working at the Oriental Insurance, who took actively encouraged the daughters to pursue music.

Her first classes were with Vid Mariyanna, senior percussionist of mridanga. “I trained in basics under him, for eight years. I rarely went out to play in the evenings, like other kids. Instead, during playtime, I practised mridanga,” she says.

Her grandmother was insistent that she trains further, even if it means having to go to Bengaluru. “My parents were very apprehensive about sending me to the city alone and my grandmother said that she’ll accompany me,” says Ranjani. In Bengaluru, under the tutelage of popular percussionist Vid N G Ravi, she got used to playing three hours at a stretch.

Her first guru, Vid Mariyanna, missed her and she travelled to Bellary whenever she could to perform lessons learnt from Vid Ravi. “In the beginning, Vid Mariyanna didn’t react to my playing because he was upset that I had moved. After few months, after one performance, his eyes filled up with tears… I was startled thinking that I did something wrong. But, he assured me that I was good and that brought tears to his eyes,” says Ranjani.

She also played in concerts and one of them was with the late Vid Balamuralikrishna. Ranjani was among four women artistes accompanying the vocalist on stage. “I was on mridanga, the other three women artistes were playing morching, ghatam and tamburi.  He encouraged us a lot during the concert,” says the artiste who has also travelled to Switzerland, Beijing and Hong Kong for concerts.

One of the concerts with Vid Sukanya Ramagopal (ghatam player) led Ranjani to be part of an all-woman band called Sthree-Taala-Taranga, accompanying ghatam and morching.Ranjani is at present is training under Vid Sudhindra, who has a unique way of teaching students. “I was asked to practice in a hall while he sat in another room listening to it and correcting me when I go wrong,” she says.