BJP has termed the Comprehensive Development Plan(CDP)-2031 prepared by Bangalore Development Authority (BDA) as unscientific and has demanded its review.

BENGALURU:  BJP has termed the Comprehensive Development Plan(CDP)-2031 prepared by Bangalore Development Authority (BDA) as unscientific and has demanded its review. The party has said that it would modify the CDP, if voted to power in the forthcoming assembly election.The CDP, which has been approved by the state government  under the pretext of orderly growth of the city, is just a way to grab farm lands, BJP State General Secretary Aravind Limbavali and party spokesman Ashwath Narayan said. 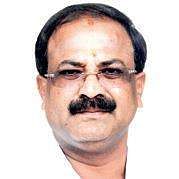 The CDP has denoted many private lands as public and semi-public parks raising suspicion of irregularities. Influential persons have been allowed to indulge in land deals in agriculture and forest lands on Bannerghatta road to make big money without any regard for public interest, Limbavali said.

He questioned the rationale of Bengaluru Development Minister K J George in approving the CDP without any debate in Metro Planning Committee.Limbavali also took an exception to BDA for not making provision for citizens to submit their objections to CDP at its(BDA) head office as such a provisoin has been made only at BDA office in Banashankari.