Bengaluru has a big, warm heart

Volunteers are giving away hundreds of blankets and medicines; They work midnights and drive to outskirts to reach the needy

BENGALURU: City’s winter nights are recording temperatures below 15 degree celsius. It is nice weather to curl up into a blanket, but many Bengalureans are stepping out into the cold to help the homeless.  They are giving away warm clothes and covers by the hundreds, and networking with each other (even with those in other states) and biking into the outskirts to reach every person in need.

Siddarth Bhitrikoty, a young working professional, says that he was initially discouraged by people around him. To them, it sounded a bit too Quixotic. But on December 23, around midnight, he stepped out with like-minded friends to distribute clothing -- jackets, sweaters, blankets, bedsheets, trousers and track pants -- snacks and medicine among people who had curled up under thin and torn bedsheets in Shivajinagar, Majestic, Commercial Street and Infant Jesus Church.

This assistant manager at a private firm always wanted to do “something for the betterment of the society”, but he kept busy schedule. In April 2017, he started ‘Manusatva’, a virtual community for working people interested in social work. The distribution-drive was done by members of this community as well.

Biking to find the needy

Even hard-nosed businessmen sell blankets cheaper, when they are told that these are being bought for the homeless, says Mohsin Kamaal, founder of I-care Foundation, who distributed 200 covers among those living rough around Yeshwanthpur railway station, Majestic, Cantonment, Shivajinagar, RT Nagar and Hebbal. “They sell it for `150 otherwise, but they gave it to us for `85,” he says. Fifty volunteers came for the drive for a week, starting from their home every midnight.

They see kindness,generosity on streets 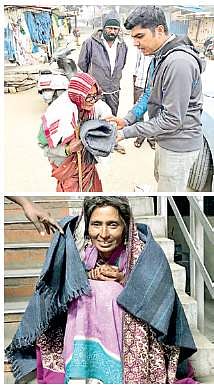 Manusatva’s Siddarth says he sleeps better from the experiences he has had on the streets. “I saw an old lady (in sixties) near the market, sleeping under a thin bedsheet. I woke her up and gave a blanket, and she replied in Kannada. I didn’t understand what she said, but I am certain that she blessed me”.
I-care’s Mohsin says that they place the blanket without disturbing the sleeping person. “We don’t know how they would react, but passersby are appreciative,” he says.

Bhushan Bhartiya, founder of Yuvashakti Foundation, says that he is moved by acts of generosity he witnesses. “One day, I saw an old- homeless lady near Kotur. I offered her a blanket but she refused it and said that she had two, and asked me to give it those who don’t have one,” he says, adding that people may be poor, but not greedy.

Strangely, good deeds can also be met with antagonism. In Majestic market area, when Siddarth and his friends were distributing clothes, they were caught by a traffic cop who shouted at them, asking what they were doing with “huge bags”. They were warned to “keep away” from the area and even demanded money from the team. “We gave him `100 and carried on,” says Siddarth. Soon, they were surrounded by many people, who were otherwise sleeping outside the shops. “They seemed to have plenty of clothes of their own, so their ‘gheraoing’ us was scary and we decided to leave,” he says.

Helping in every way possible

Bengalureans have extended their generosity to homeless in other states too. “Share a Smile” is the brainchild of Sameer Hasan, a techie in the city. The idea is to rekindle hope in people who have lost all reason to smile. This December, 60 volunteers from corporate offices collected warm clothes and blankets and shipped them to Delhi. The volunteers in Delhi biked through the city to hand over blankets to anyone sleeping without one.  If they can’t cover hundreds, people even run ‘micro’ projects. Sreeja Sreedharan, a corporate employee, came up with “Do Your Bit” bags in 2016. She calls it an “all season” bag, which contains a blanket, two pairs of clothes, one pair of slippers, a sweater and toiletries. She has so far prepared ten such bags, each costing `2,400, paying for three of them. The rest were sponsored by friends and family. She says, “I don’t expect receivers to be overwhelmed by this gesture. Their problems are bigger and a ‘bag’ cannot fix it. But I would like to do my bit to make it easier for them”.