IN the season’s worst fog-related delay so far, operations at the Kempegowda International Airport (KIA) were affected for more than three hours on Sunday morning leading to 140 flight schedules being

BENGALURU: IN the season’s worst fog-related delay so far, operations at the Kempegowda International Airport (KIA) were affected for more than three hours on Sunday morning leading to 140 flight schedules being affected. This figure includes 63 flights which were scheduled to depart KIA and 54 flights scheduled to land in Bengaluru.

As dense fog enveloped the runway at the airport leading to visibility dropping below the required 800 metres for takeoffs and landings, operations had to be suspended at 4.44am and the conditions improved enough only by 8.25am, a gap of over three hours when no flights landed or took off at the airport. With a maximum number of flights at KIA operating in the morning, any delay due to fog affects operations throughout the day.

On Sunday, 8 flights were diverted as well, 4 of which were sent to Chennai and the rest to Hyderabad. In addition, 7 arrival flights and 8 departure flights were cancelled. All cancellations were from IndiGo Airlines. On December 30, 113 flight schedules had been affected due to fog which was the highest figure this year till Sunday.

The KIA uses an instrument landing system of category I currently which requires a runway visual range (RVR) of 550 meters for landing. Work on upgrading this system to the CAT III B system with which planes can operate with just 46 meters of RVR is currently underway and is slated to be completed only by September 2019. 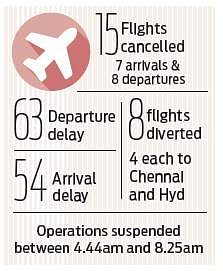