In 19 years, Visvesvaraya Technological University earns nothing from patents

BENGALURU: It has been 19 years, and the Visvesvaraya Technological University (VTU), Belagavi, the only Technical University of the state, has not earned a single rupee from patents since its inception.
This has been revealed in the National Institutional Ranking Framework (NIRF), which was released by Union Ministry for Human Resource Development recently.

As per the report, the earning of VTU through patents is zero. Although it is not mandatory for a university to get a particular number of patents, when compared to its own affiliated colleges and autonomous colleges, it is far from getting patents.

“Being a university, we should definitely have got more patents. Shortage of regular faculty members was a major hindrance,” said a senior official of VTU.

‘Lack of earnings’ from patents is a reflection of lack of research activities by faculty members at the university. Faculty members are the ones who generally apply for patents of their research work.

Another reason for the university’s failure to get patents was non-availability of 12 (B) status all these years. Recently, the University Grants Commission (UGC) has granted 12 (B) status to VTU, under which the university will now be eligible to apply for Central funds, which also includes earnings from patents. 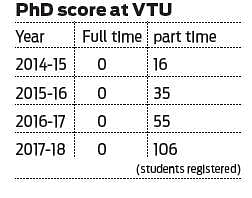