The much touted Surya Raitha scheme of the state government to replace irrigation pumpsets (IP sets) with metered solar water pumps that generate excess energy will be launched.

BENGALURU: The much touted Surya Raitha scheme of the state government to replace irrigation pumpsets (IP sets) with metered solar water pumps that generate excess energy will be launched in Kanakapura on Friday as a pilot. Initially, 310 IP sets will be replaced by solar water pump sets which will have 1.5 times the capacity required to pump water to ensure that 1/3rd of the energy generated will be supplied to the electricity grid.

Announced in September 2014, the scheme will assure day time power supply to farmers which will help them irrigate their fields without having to turn on the IP sets in the night. This will ensure that wastage of power as well as water is checked. The pilot project has been financed by a combination of investment from farmers, subsidies from the Union and state governments as well as an interest-free soft loan provided by the Bangalore Electricity Supply Company (BESCOM). This loan will be recovered from the value of excess energy exported into the grid, BESCOM officials said. The surplus amount, once the loan is recovered, will be credited to the farmer’s account. 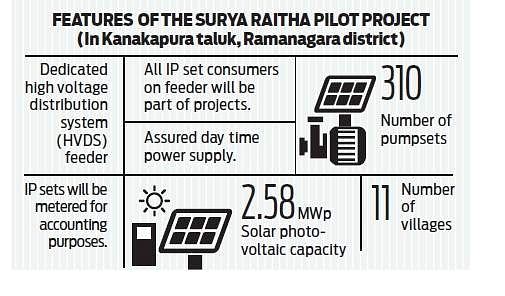 “The net metering revenues will be deposited into an Escrow account as per tariff fixed by the Karnataka Electricity Regulatory Commission (KERC). The tariff is used for loan repayment, generation-based incentives through farmers’ co-operative societies and a sum paid to a society for its maintenance,” a statement from BESCOM said. The payback period is expected to be between 12-14 years based on the amount of electricity generated and the utilisation of the pump set.

As part of the project, BESCOM will create a farmer’s co-operative, channel subsidies, provide loans, sign power purchase agreements for 25 years and ensure daytime power supply to the pump sets. Farmers will provide shadow-free land for installing the systems and safeguard the solar photo-voltaic (pv) systems. A ‘Harobele Surya Raitha Vidyuthchakthi Balakedarara Sangha Niyamitha’ society has been formed for the pilot project in Kanakapura taluk. The society will receive quarterly payments from BESCOM and disburse the same among the farmers.

Benefits to farmers will include increased agricultural productivity, steady daytime power supply and a steady source of income even during drought years. The government will benefit from stoppage of subsidized energy to agricultural farmers and BESCOM will save on infrastructure costs and see a reduction in demand and technical losses.