Living in fear in Namma Ooru

Following attack on Northeasterners on NY’s Eve, community members talk of feeling insecure in city and lack of support from cops

BENGALURU: New Year’s Eve, a year ago, raised questions about women’s safety in Bengaluru. This year, a disturbing mob-attack raised concerns over safety of people from northeastern states. Three Northeasterners, including one woman, were attacked by a gang of partying goons in Indiranagar on New Year around 2 am.

Gautam Tamang, Shayog Thapa and a female friend were returning after work on a bike, when they had to pass through a group of 15 men dancing and celebrating. Gautam was driving, and the bike brushed against revellers, on apologising, all of them were thrashed. 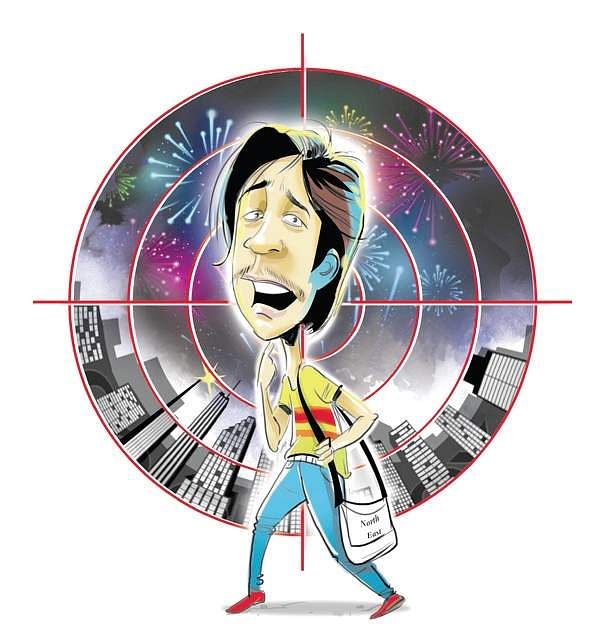 Following this incident, Northeasteners and Indian Nepalese have started discussing how they experience fear in this city and how little the police do to reassure them. In a community chat group, members shared instances of sexual assault and murder that they believed  were never investigated seriously.

A social activist, who has been working for eight years with the Northeast community, says that this New Year’s eve incident is just one of the many in which people with Mongolian features are targeted. They rarely get help from the police, says Rahul. “Whenever we approach the authorities, our concerns are treated with laxity. I personally feel that we are still not considered citizens of the country. It takes a lot of effort to even register our cases and for them to be followed up seriously,” he says.

Dr Boralingaiah, deputy commissioner of police, south-east division, agrees that many Northeasterners face difficulty when they approach the police. He has been actively engaging with the community for years to help make the process easier. “I will call a meeting in two weeks and talk to the heads of Northeast associations,” he says. “They should contact local police stations if they face any trouble. If they find the station staff unresponsive, they can always get in touch with me… I have even received calls at midnight to address smaller issues.”

The community, on its part, is organising a meeting on January 23 to try and find solutions to this spate of violence. “We need to stay united,” says Monika Tamang, wife of Gautam, adding that they “feel extremely insecure and vulnerable as of now.” She is still recovering from the shock.

The family has been living in this city for the past 12 years and this is their first incident that has shaken them. She says that even the 2012’s exodus of Northeasterners didn’t worry them. “There’s no security for us… What if we are murdered, will anyone care,” she asks. Fear is what kept them from filing a complaint after the incident, they did not want to risk the wrath of “the majority”. Then, out of nowhere, the CCTV footage was leaked and police arrested the ten accused on January 16.

“Now I hear that they have been released, which makes us all the more afraid,” says Monika, adding that they were not even informed of that development.

Their life has been thrown into a disarray. Their daughter has an exam this February and they are not sure if they should stay on. The police has given them a number to call in case of emergency. “How can we call a number when we are being attacked,” Monika asks, baffled. The police had informed the family to avoid talking to press.

What about Trisha Tamang?

It will be two years in February since the mysterious death of a two-and-a-half-year old Trisha Tamang. The toddler was playing in the corridor of her house and went missing at 7 pm on February 11, 2016. On frantic search, her body was found disposed in a garbage heap behind her house at midnight. Her parents were taken to Gujarat for interrogation and a test was conducted to see if they had any role to play in the murder of their daughter. “Me and husband were taken to Gujarat and tests were conducted. We were told we would be given a report within 20 days.

It has been two years since and nothing has been concluded on my daughter’s murder case,” says Seema Tamang, mother of Trisha. “The case was not at all handled well by the police. We kept running after the case but the person-in-charge of the investigation was changed frequently. Now, we have to decided to focus on our future and our four-month-old son,” adds Seema. “The only thing I want is for the police to know that the Indian law applies to us as well,”says.