Open fire if you are attacked, police chief tells his men in Bengaluru

After a string of attacks targeting on-duty police personnel across the city over the past few weeks, the city police have decided they will not take things lying down.

BENGALURU: After a string of attacks targeting on-duty police personnel across the city over the past few weeks, the city police have decided they will not take things lying down. On Saturday, City Police Commissioner T Suneel Kumar said that such attackers will be fired upon. Kumar had on Friday issued strict instructions to his juniors to step up policing and ensure such attacks are stopped immediately. He had also warned of action against senior officials if any more such instances were reported in their jurisdiction.

Suneel Kumar told reporters, “Police personnel on duty should open fire to save themselves if anti-social elements target them. There is no other option. The incidents reported so far have been taken seriously. However, the accused involved are not history-sheeters or habitual offenders. We have already arrested some of the attackers and they are in judicial custody.”

The orders have come in the light of the city police facing an unprecedented number of attacks on its personnel across Bengaluru. A total of 13 attacks on police constables have been recorded in January itself with major incidents like the one in which a gang stole a rifle from night beat constables. In his directive to his staff, Kumar asked them to use force whenever they are obstructed from carrying out their official duties.

According to the police manual, the use of force is authorised to stop crimes in progress. If the situation demands, constables can fire at the assaulters. Kumar said these powers must be utilised to guarantee the safety of his men. 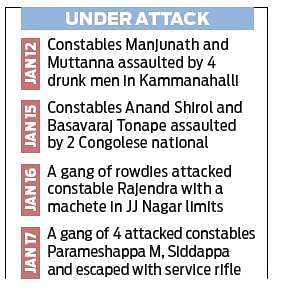