The death of two juvenile tigers due to suspected poisoning at Bandipur Tiger Reserve has sent shock waves even as the second phase of tiger census is going on in the protected areas. With state Fores

BENGALURU: The death of two juvenile tigers due to suspected poisoning at Bandipur Tiger Reserve has sent shock waves even as the second phase of tiger census is going on in the protected areas. With state Forest Department going in for forensic and DNA testing, wildlife and veterinary experts say there is need for a thorough inquiry.

They added that till date, cases of such tiger deaths have remained unresolved. Incidents of suspected poisoning of wildlife by residents and poachers have been reported from a few protected areas of the state in the last five years. There have been incidents where tigers, panthers, deer and other scheduled species have been poisoned. However, in most cases, investigations have remained incomplete and there has been no conviction of people involved in such crimes. The death of two tigers (outside Bhadra tiger reserve) due to poisoning at Gandidal village and Ummblebailu in Bhadravati taluk still remains a mystery.

Dr Prayag H S, senior PhD research scholar, KVAFSU-Bengaluru and Wildlife Institute of India, Dehradun, said in poisoning cases, there is a need for forensic tests and thorough analysis. He added, “In a forensic analysis, normally four types of poisons - OTC, OCC, cyanide and zinc phosphide - can be detected within three to seven days.

The entire stomach content, a part of intestine, liver and kidney is sent for forensic analysis. If poison traces are not found in stomach, one can further look for toxicity in liver, intestine or kidney. There is a need for qualitative analysis as one has to determine the quantity of poison required to kill a tiger.”

Nowadays, poachers are using more advanced poisons which are herbal based and they are difficult to detect, Dr Prayag added. Phyto-chemicals like datura seeds are used by tribal communities to poison tigers. However, forest officials opine the present case may be due to local involvement. Otherwise, poachers would not have left the body intact. A senior forest official added, “A thorough inquiry will be done to ascertain the reasons and trace the culprits.”

Experts have raised objections and said that there is no professional approach to detect the crime. Forensic experts should have been called immediately at the crime scene. 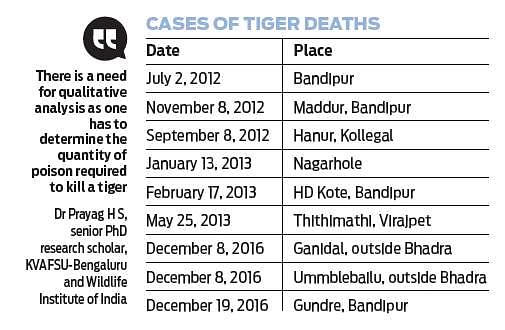