Residents point to blatant encroachment of walking paths across city

BENGALURU: Encroachments on footpaths and pavements in Bengaluru have been a burning issue for long. Revised Master Plan-31 hardly talks about pedestrian safety or pavement encroachments.
But, all over the city, this walking path is shrinking with restaurants, shrines and private vehicles occupying them. Local corporators, when questioned by residents, give the strangest of explanations.

My hotel, my pavement 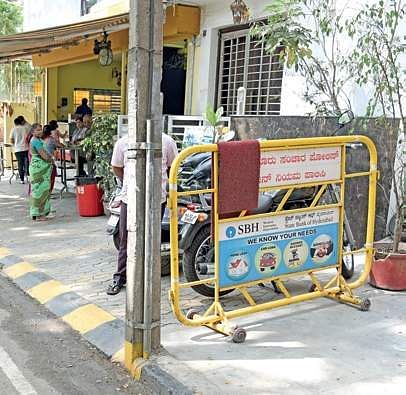 Around the month of December last year, B S Manohar, a resident of Basavanagudi near ML Krishna Rao Park, noticed a new hotel coming up on a piece of land at the intersection of National College Road and Kanakpura Road. “There used to be an old hotel in the same place but they broke it down and constructed this new one,” he says. While there was nothing alarming in starting a new hotel, what was of concern was that this hotel started to tile the pavement just in front of it, kept four standing tables for customers and began using the pavement as an extension of the shop, “Not only that, the pavement was slightly lower than the shop. So the owners filled it up with concrete to bring it at the same level.

They have occupied around 25 feet,” says Manohar who is also the President of the Basavanagudi Resident’s Welfare Association. During peak hours there is intense traffic on the main road with buses and cars coming close to the pavement but pedestrians are forced to come down due to this obstruction.  G L Markandeya, BBMP AE, VV Puram, says he checked on the restaurant on Wednesday. “We had asked the restaurant to remove the tables. We will further check if it has complied and take action accordingly,” he says.

This encroached space is hallowed 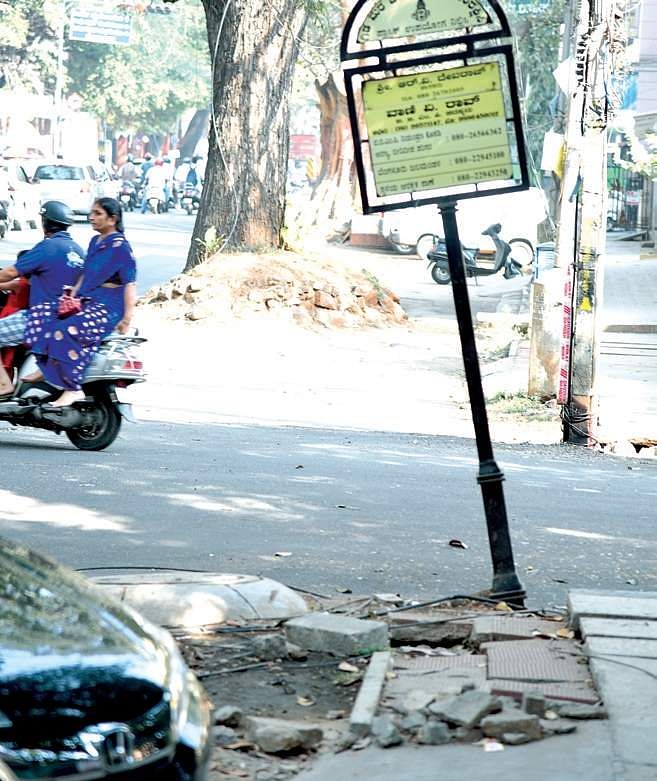 Near the Seshadripuram Post Office, at Nehru Nagar, Chitra Venkatesh, a local resident points out a case where a pay and use urinal was closed by the BBMP to the relief of residents. Instead of leaving the pavement open for pedestrians, a temple was constructed, soon after. “Since it is a temple no one says anything. I orally mentioned this to the local MLA but nothing has been done so far,” says Chitra, secretary of the Kumara Park Residents Welfare Association.

The temple according to Chitra has also encroached upon a playground right next to the pavement. Just six months back, Chitra had got an illegal temple removed from inside the Triangular Park, located near NS Iyengar Road. She had even complained to the Lokayukta on the issue. N S Revanna, former BBMP AE of the area, says, “This temple is very old. Since the time I was in the ward I did not receive any complaints.”
She also highlights the case of a media company that has cars and bikes of its employees always parked on the pavement.

While many parts of Bengaluru (as mentioned above) sees encroached footpaths, nowhere is it as blatant as in a place like the New Tippasandra Market. The encroachment is so widespread that even most parts of the inner areas have been taken over by shops according to to Minakshi Prabhu, secretary, HAL 3rd Stage Residents and Taxpayers Association. The New Tippasandra Road around which the entire market has grown is over a kilometer long. Meenakshi who has been staying in the area for many years recently saw the full width of the street, when the road and pavement was cleared during for CM, Siddaramiah’s visit, recently.

“I think I saw the entire road and pavement the first time. All the pushcarts, a shop encroachments were cleared. I don’t remember this happening before,” she adds. Shilpa Abhilash, the local  corporator, says, the traders in the market have been there for around 45 to 50 years and shifting them overnight is not possible. “We have asked the government for an alternate arrangement around the BEML circle, but since it is the property of the central government we are still waiting for their permission,” she says.

If there is one purpose that pavements have been widely used for illegally, it is to park cars and vehicles. Just take a walk in Indiranagar on 100 feet road all the way from KFC signal down towards Domlur bridge. Although the pavements are quite wide on both sides wide, one will notice numerous vehicles and bikes parked infront of stores and restaurants on this road. This stretch of road being a popular watering hole and shopping center, the area becomes crowded especially during weekends, with vehicles being parked even infront of the residents’ gates.

Around June last year members of eight RWAs in Indiranagar had sent a letter to the then BBMP, Chief Engineer, East, B S Prasad to clear all pavement encroachments. A month back they raised the issue when Dr Ashok, joint commissioner (East), BBMP had visited the area. No concrete action has however been taken so far. In Ulsoor too an example of the same kind of encroachment takes place. According to Purushottam Venkatraman, President of the Ulsoor Lake Residents’ Welfare Association, opposite RBI quarters four layers of parked cars regularly block the road as well. “ Police and the BBMP turn a blind eye,” he adds.