As many as 1,921 people killed themselves in 2017, which is the highest in the past four years; Depression, substance abuse, economic problems triggered maximum suicides.

BENGALURU: The number of suicides in the city in 2017 was the highest in the past four years.
According to figures available with the city police, an average of 5 people committed suicide across the city everyday in 2017. As many as 1,921 people committed suicide, which is the highest in the past four years. This includes 1,268 males and 653 women who took the extreme step. In 2016, this figure was 1,795 with 1,207 males and 588 females.

In 2015, 1,855 committed suicide; in 2016 it was reduced to 1,795 and it saw a rise of six percent (126 more deaths) last year.According to Harshitha, a counsellor at Yuva helpline of Sa-Mudra foundation, an NGO, the helpline received at least five distress calls every week.“It takes sometime to understand their motive to kill themselves and later we counsel them in person. We see a lot of teenagers trying to commit

suicide as they fail to handle academic pressure or the expectations of parents.” 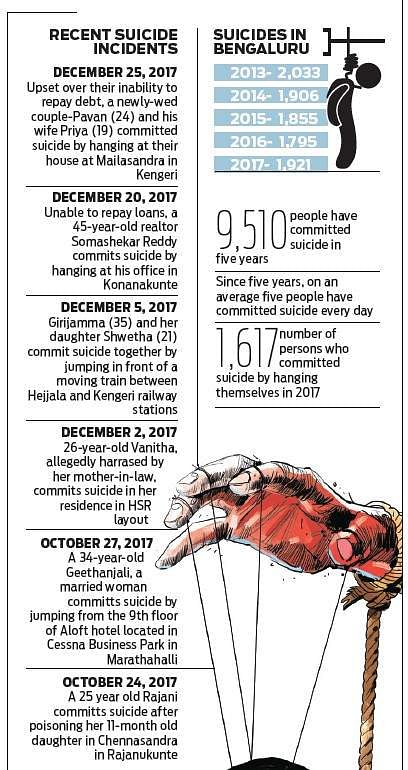 Regarding age groups which commit suicides, Dr Mahesh R Gowda, consultant psychiatrist, Spandana Health Care, said, “What literature says is anyone in the age group of 25 to 65 could commit suicide, but nowadays there were cases of teenagers as young as 14 doing it. The reasons for the extreme steps among teens could be frivolous issues, such as relationship issues, comments on social media or being scolded by someone.”Speaking on the most common reasons for suicides, Dr Gowda said 90 per cent of victims had a psychological problem, of which depression was the most common one, followed by addictions and psychosis.

“Depression with a combination of substance abuse is a very dangerous combination and can provoke suicide,” he said. Another reason could be socio-cultural and economic problems, especially among people who migrate from rural to urban areas.According to Dr Satish Ramaiah, psychiatrist, People Tree hospital, suicides were most commonly seen in men in their 40s, while many unsuccessful suicides were seen in youths. “Attempts by teenagers are usually impulsive, and done in a fit of anger influenced by external factors,” he said.

“Parents must keep a watch on their children for signs of depression,” he added.Most resort to hanging to kill themselves Figures show that a majority of the people, 1,617 in 2017, killed themselves by hanging. Dr Gowda elaborated that this could be because the number of males that committed suicide was more. “Males prefer a more violent form of death such as hanging. Hanging, if done right, causes death instantly, and the violence of it attracts males,” he said.

Dr Ramaiah attributed the prevalence of suicides by hanging, to its easy accessibility, as compared to suicides by overdosing on drugs. “People who commit suicide this way are usually impulsive,” he said. However, Dr Ramaiah did not consider hanging to be an especially violent method of suicide, saying more violent people used methods like stabbing themselves, while those with emotional dysfunction go for overdosing.

Stay up to date on all the latest Bengaluru news with The New Indian Express App. Download now
TAGS
suicide bengaluru