A cab ride to Kempegowda International Airport turned into a nightmare for a 26-year-old woman based in the city, when the driver of the vehicle forced her to strip, took pictures of her on his phone

BENGALURU: A cab ride to Kempegowda International Airport turned into a nightmare for a 26-year-old woman based in the city, when the driver of the vehicle forced her to strip, took pictures of her on his phone and then threatened to call his friends to assault her as well as share those pictures online in case she tried to lodge a complaint. After taking a detour, the driver, attached to the cab aggregator Ola, stopped at a secluded spot and locked all the windows and doors, which is when the incident took place. He then dropped her to her location, threatening to rape her if she complained.

Would a safety app, like the much-publicised Suraksha app launched by the Bengaluru police, have helped? In a survey conducted by the City Express, among women in their early twenties, a surprising 67 per cent per cent said that they have no confidence in such stand-alone apps. Almost all said that they would rather rely on the option available on the cab aggregators' app, of contacting emergency numbers, for their safety. 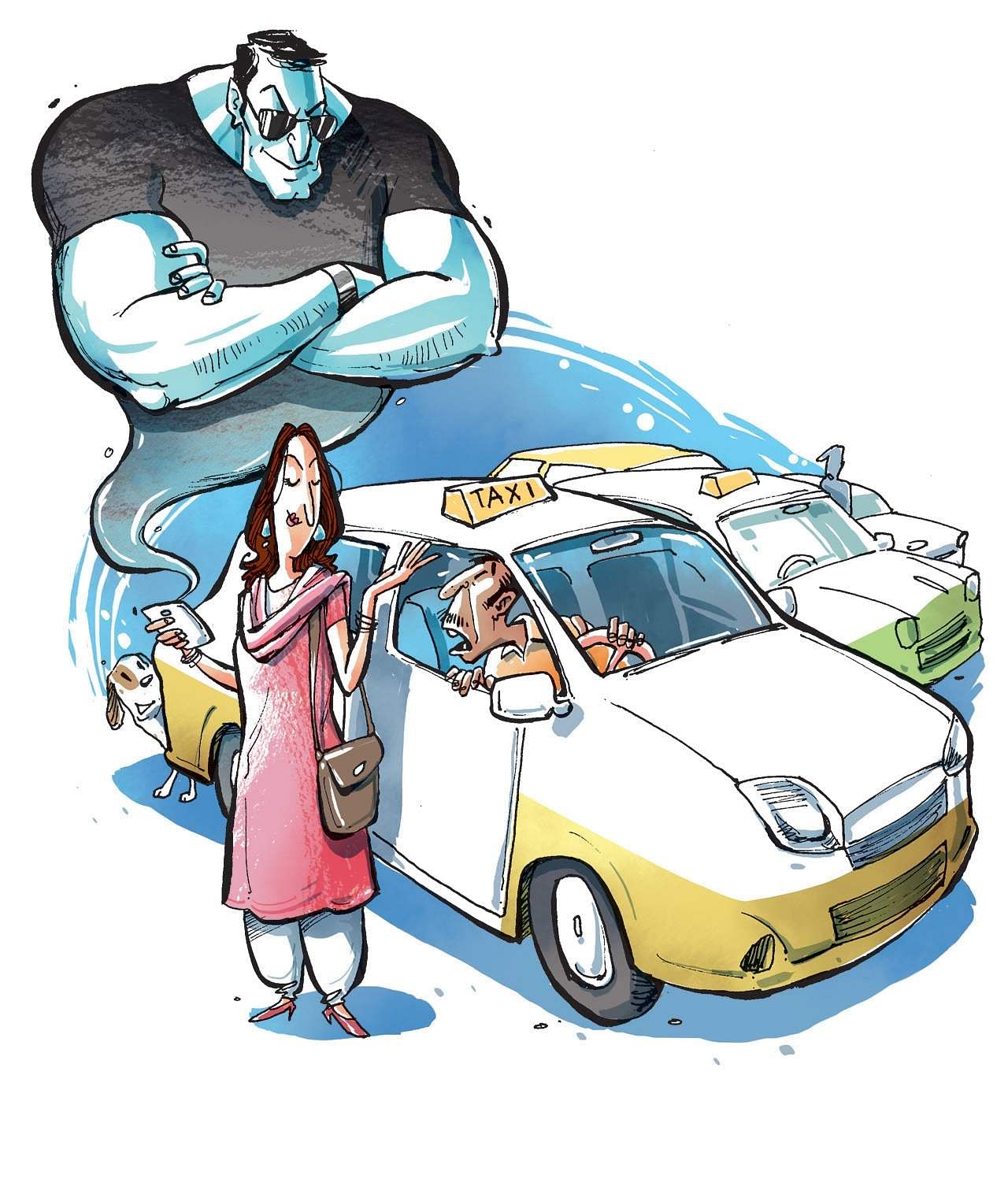 Perhaps, the police should take heed and try to integrate their response-system into cab-aggregators'  apps. Safety app? What's that? We asked 64 women, between 20 and 22 years, what makes them feel safe while travelling in cabs. Out of the respondents, 67 per cent of the women said that they do not use safety apps and do not find them helpful. A few of them said that they don't even know of the existence of such apps, and 32 per cent have safety apps but do not use them. One respondent said that she relied on a pepper-spray can while travelling by cab.

Nearly all women said that they trust their family members, who are listed on the emergency contacts on taxi apps, to respond fastest. Not, the police. That said, only 58 per cent of them actually share their tracking details with these contacts.

While they do place their trust in the taxi app to commute fast, they do have suggestions for these aggregators. Nearly a quarter of the respondents -- 23 per cent of them -- suggested women cab drivers, 12 per cent suggested professional training for cab drivers before being selected for the job, and 9 per cent suggested CCTV monitoring. Other responses included a need for silent alarms and a thorough background check of drivers.

Seemant Kumar Singh, additional commissioner of police (East zone), says that the recent Ola incident is a rare case, and that such incidents are not frequently reported. "We have to tighten our system. Their (cab aggregators') business needs to be foolproof - they need to gain the confidence of customers. We're looking into what the private cab aggregator already has in place, and what they can do to ensure the safety of the passengers. In this case, for example, the driver didn't have verification from the employers," he says.

Adding to this, Geeta Menon, secretary of Stree Jagriti Samiti, says, "What is the
training given to drivers? There should be fear put into them - that this kind of behaviour is not accepted, and that strict action will be taken," she says.

As an employer, cab-aggregators should raise awareness among drivers, she says. "The primary point is that most companies neglect the issue of sexual harassment at the work place. Firstly, there must be gender-sensitisation training given to cab drivers. Secondly, for women passengers, there must be systems put in place, such as the Suraksha App. One can't just tell women to just be careful, because we are careful. We can take steps to stay safe in whatever way we can - by having control over our confidence, by having an app ready or having a link ready," she says, adding, "but, why should there be a need for us to be so conscious about our safety?"

Regular cab commuters tell us they have devised safety checks on their own. Christina Frank, who works at Bagamane Tech Park, says, “I commute regularly from my office to home around 1 am and I always make sure that the driver picks me up from inside my office where the security guards can get a good look at him. Sometimes, I just tell them to note down the cab number and give me a call in half an hour just so that the driver knows someone is keeping track."  Others say they are particular about sitting in the back seat and ensuring that the child lock is not engaged.

Plan ahead and chalk out a
rough route that you will be taking and the time it will take to reach
your destination.
As far as possible, board the cab in the presence of someone else like a security guard, a colleague or a friend.
Ensure you always board the right cab. Match driver and cab details like license plate, driver picture and then board the cab.
Preferably sit in the backseat and always check if the child lock mechanism has been enabled.
Share trip details with a friend, family or colleague.
Avoid calling the driver and sharing your contact information.
Add emergency contacts to your app. Familiarize yourself with the location of the SOS button in the app.
Avoid taking detours while travelling at night. Even if the driver tells you that it is a shorter route or it will cost less, insist that they stick to the route displayed on the screen.
Keep your phone charged, stay reachable. If needed, carry
a powerbank.
Post ride, please give feedback to help the next rider.

Don’t ignore feedback, aggregators say
According to aggregators, the post-ride feedback that you give is an important tool used to weed out aggressive and unruly drivers and should not be ignored. “A lot of riders tend to give five stars to every driver just to get the rating screen out of the way. Others give one star but do not elaborate on the reasons. This can prove to be detrimental to the next person who takes the ride,” explained a security expert who consults for a taxi company and did not want to be named. Explaining how the ratings are used, he said, “Drivers who consistently get lower ratings will not be given rides. Companies also question the driver or recommend training sessions if specific feedback is given stating that the driver misbehaves. However, most drivers today have a high rating simply because riders tend to gloss over the faults in the ride after it is completed.”

According to Seemant Kumar Singh, ACP (East zone), the following are some measure they are adopting:

There must be quality check done on the driver's profile, they need to be verified and cross-verified

Double check when a lady books a cab

Some areas need extra attention, such as railways, airport and IT sectors (because of late working hours)

Keep track of the routes the drivers take - issue alert when a driver takes a longer route- this can also keep those drivers in check, who take longer routes to get extra money

Don't share contact numbers
According to cab aggregators, it is imperative that customers know the tools available to
them to report a cab ride gone wrong. According to Ola’s safety factsheet, adding emergency contacts is the first step every rider should take. “Customers can share ride details with five contacts everytime they take a ride or for particular rides. A live tracking link is shared via SMS with the emergency contact,” Ola suggests.  Avoiding the sharing of mobile numbers is also a recommendation that both Ola and Uber make. “There’s no need to share your phone number or other contact information with your driver. If a rider and driver need to contact each other, the Uber app automatically anonymizes both phone numbers to protect everyone’s privacy,” Uber says in its safety tips for riders.