Report submitted to commission found that storage capacity of lake had diminished by 71.45 per cent

BENGALURU: In a damning 329-page report submitted by the inspection commission appointed by the National Green Tribunal to check the compliance of its orders on conserving Bellandur Lake, the state government and its agencies were found to have “miserably failed to discharge their obligations to the society and their duties.”

Two days back, Deputy Chief Minister G Parameshwara who is also in charge of BBMP, BDA and BWSSB had visited the lake and said that the government will give priority to save lakes from pollution and encroachments.

It noticed glaring defects in the disposal of compost by the Bangalore Development Authority (BDA). According to the report, as of today, 183 mld (millions of litres per day) of untreated sewage is flowing into the Bellandur Lake. Only 496 of 873 establishments in the lake’s catchment area had Sewage Treatment Plants (STPs), it said.

The commission comprised advocates Raj Panjwani, Rahul Chaudhary and Sumeer Sodhi. A professor from the Indian Institute of Science (lISc), Bruhat Bengaluru Mahanagara Palike (BBMP) Commissioner, a senior scientist from Central Pollution Control Board (CPCB), and Secretary of Karnataka State Pollution Control Board (KSPCB) were assisting the Commission in inspecting the Agara, Bellandur and Varthur lakes lakes on April 14 and 15.

The Commission also found that there was no appropriate arrangements made in the residential and commercial areas for proper segregation and disposal of solid waste.“It’s a damning report ! BWSSB and civic bodies need to wake up. In fact, the citizens had highlighted this to the Commission during their on ground investigation of the lakes. As per the report there is not even one millilitre of clean water in the lake and the same was filled up with sewage, effluents, solid waste, weed, debris etc,” said Sonali Singh, resident and member, Bellandur Lake Group.

Tushar Girinath, Chairman, Bangalore Water Supply and Sewerage Board (BWSSB), said, “BWSSB can only aid in the survey of which establishments have STPs and which don’t. It’s up to the KSPCB to get the power supply disconnected to those apartments which do not have STPs. We don’t have the power.”

The Commission concluded that the fire was caused by accumulated waste, especially plastic. The fire could be accidental or deliberate, but not automatic. It is futile to try removing macrophytes till desilting is completed. Huge mounds of the deweeded hydrophytes along with domestic waste like plastic materials like wrappers, sachets, carry bags, etc exist on the site. Also, composting is not being done.

“The CPCB fears that if the wet compost remains in the periphery trenches or compost pits for beyond a month, pollution from unscientific work may be another challenge for the environment. The once pristine lake of Bellandur is nothing but a dumping area of Municipal Solid Waste and Construction and Debris waste,” the report said. 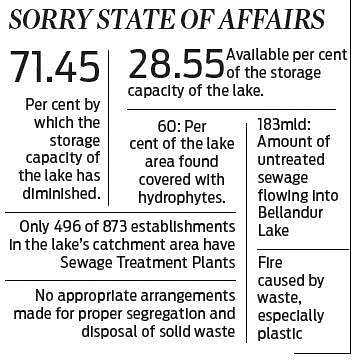 Now we are on Telegram too. Follow us for updates
TAGS
Bellandur Lake National Green Tribunal