Palike’s records show that number of attacks falling by around 1,000 every year. But residents and elected leaders say numbers don’t reflect reality

BENGALURU: Going by Bruhat Bengaluru Mahanagara Palike’s official statistics, dog attacks in Bengaluru is decreasing every year. Authorities claim that because Animal Birth Control  (ABC) programme has been more effectively carried out, they were able to keep the number of stray dogs and attacks down.

But residents in different neighbourhoods and opposition leaders are crying foul. They say that the Palike is misleading the public with these figures. How can the ABC programme have worked wonders when all of Bengaluru has just two dog squads, which catch dogs for the birth-control procedure, they ask.
They say that cases of dog attacks could be under-reported. Dr Akshay, a veterinarian who works with NGO Sarvodaya, agrees: “The cases being recorded by the BBMP form just 25 per cent of the total. Many people do not go to the government hospital because medicines are not available usually. People tend to head to private hospitals and the Palike should take into account data from these centres too”. Opposition Party Leader in BBMP Council Padmanabha Reddy raises the same points, and says numbers are only of people who go to government facilities. 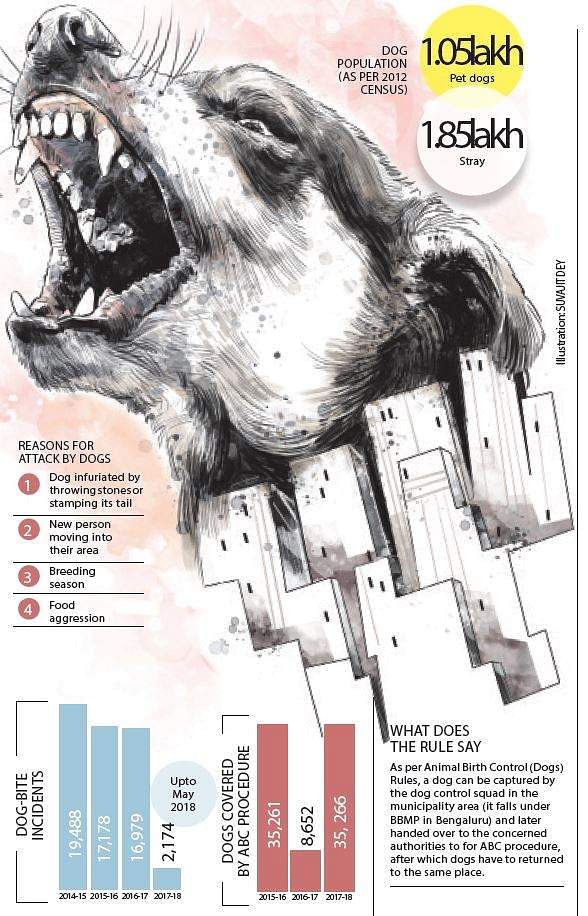 G Anand of BBMP Joint Director (Animal Husbandry) says that the ABC programme has been more effective in the last few years. “There were hiccups for two to three years, but now it is on track,” he says.
However, even BBMP’s official sources say that they are severely short-staffed. There are only two dog squads attached to the agency, according to them.

Each squad with two assistant directors, ward inspectors and two attenders is assigned four zones, which is a vast area. “BBMP limits is 800 sq km, what can two squads do? There are more than 93,000 roads, how many can they cover every day,” asks the source.Padmanabha Reddy also blames unattended garbage piles. “These black spots attract dogs, who come in search of food,” he says.

What does the rule say

As per Animal Birth Control (Dogs) Rules, a dog can be captured by the dog control squad in the municipality area (it falls under BBMP in Bengaluru) and later handed over to the concerned authorities to for ABC procedure, after which dogs have to returned to the same place.

Now we are on Telegram too. Follow us for updates
TAGS
BBMP Bruhat Bengaluru Mahanagara Palike Animal Birth Control