‘Nature to be kept in mind while building structures’

Architect B V Doshi talks about his big win, time spent in Bengaluru and his thoughts on the city’s losing grip on nature and heritage

BENGALURU: Ace architect B V Doshi who became the first Indian to win the Pritzker Prize is a philosopher at heart. Most of his works like the IIM Bangalore (IIMB) are an extension of his philosophy of buildings being one with nature and resembling living organisms rather than just bricks and concrete. Here are some excerpts from an interview with City Express.

What was your immediate reaction to the Pritzker Prize win?
I was absolutely stunned. I felt overwhelmed and grateful. I thought how nice of the jury to give me this award. I cannot describe the feeling however much I say it in words. 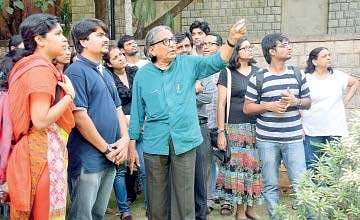 At 90 years do you think the recognition for you and India came a bit too late?
There are many other architects, for example from Brazil who lived till 100. Somebody called me and said you still have some time left (laughs). What I mean to say is that whenever it comes, it’s the right time. I am just grateful that I got this recognition. Luckily, I am active and still moving around doing various things. Foremost, however, I think there was an inner satisfaction all these years, with the work that I did. What I did has meaning and I am glad that this meaning has now been appreciated.

What do you think about the changing landscape of the city?
I came to Bengaluru around two to three years ago and I saw that the lakes have become dry, many things are happening around it. Many old buildings are gone. I don’t think it’s anyone’s fault. It is first about leadership, then institutions and then citizens. I have seen a few new constructions and I don’t think they are looking at what is inherent.

When building such structures, it important to ask bigger questions like, ‘what role will the institution play in one’s life?’  Institutions should be built like living organisms, one we can talk to, have a dialogue with. Everything is time-bound not emotion-bound. I have a garden in the office and at home. Just like people have space for small deities and Gods, I think they should set aside little corners everywhere for some greenery. It will make a big change in a person’s psychology and mental health.