Commuters have hailed the introduction of four diesel-operated suburban train services from Monday.

BENGALURU: Commuters have hailed the introduction of four diesel-operated suburban train services from Monday. In a first, the trains which will go from Banaswadi via Bellandur, will connect to Baiyappanahalli, providing access to Namma Metro’s Phase I network as well.

In its detailed timetable, the SWR has listed the departure time from Banaswadi at 9.50 am for train number 06571 and at 12.40 pm for train 06573. En route, the trains will pass through Baiyappanahalli, Bellandur Road, Carmelaram, Heelalige, Anekal Road before stopping at Hosur at 11 am and 1.45pm respectively.

According to commuters, the morning trip to office will be easier. “It is a welcome move as the city waits for a full-fledged suburban rail network. There is a large section of people who commute from Hosur and since the train will stop at Baiyappanahalli, we can be connected to all parts of the city easily through the metro station,” said Pradish R, who commutes from the Carmelaram station daily. These trains will leave Hosur in the return direction at 11.15 am and at 3. 20pm.

In addition to the diesel services, the MEMU services will provide connectivity to the KSR station and Whitefield, a commute that easily takes more than 90 minutes in peak hour traffic. The train will leave KSR station at 7.50 am and reach Baiyyappanahalli at 8.15 am, shortening the travel time to just a few minutes. Interestingly, Namma Metro also provides this connectivity between the two areas, but takes a little while longer for the journey owing to the higher number of halts.

In a statement, SWR said that the MEMU services, which can carry 2,400 passengers with eight coaches, had become very popular among the commuters. “The induction of 4 additional services has been done on a cost sharing basis between the Ministry of Railways and Government of Karnataka,” the statement said. 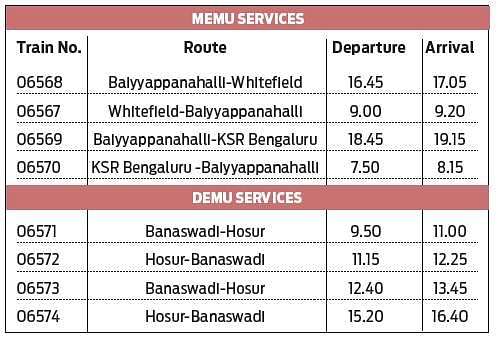