‘Music is a way to achieve salvation’

Vidwan Mahesh Swamy wears many hats. A popular Carnatic classical flautist and vocalist, he is also a musican who plays the morching, harmonim and the veena and is also a theatre personality.

BENGALURU:Vidwan Mahesh Swamy wears many hats. A popular Carnatic classical flautist and vocalist, he is also a musican who plays the morching, harmonim and the veena and is also a theatre personality. Born into a family of musicians, Mahesh’s mother, Nanjamma (Mani) was a classical veena player (still teaches vocal and veena) and a vocalist while his grandfather, Vishveshwarayya was a musician too and many concerts were often held at his place. His uncle, Chi Udaya Shankar was an eminent lyricist and dialogue writer in the Kannada film industry. 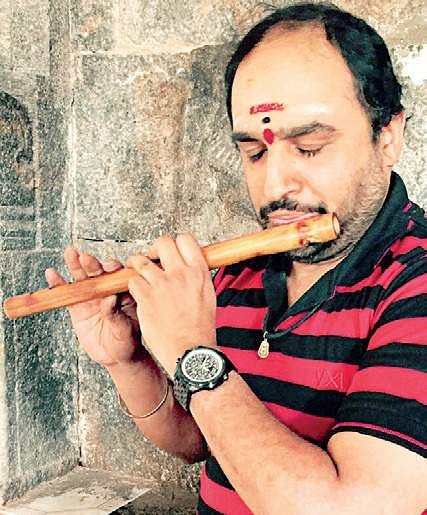 Without any formal training Mahesh started singing when he was in his fifth grade. When he reached seventh grade he started penning down poems. He also tried his hand at theatre with the popular Nataranga theatre group and shared stage with many eminent actors. “Taking up music as a career was not encouraged much back those days so to earn a living I was forced to take up a course that would pay me a good salary. I therefore took up B.Sc mathematics but it was not my cup of tea and I didn’t enjoy it,” says Mahesh. He regularly participated in college concerts and won many prizes. His father was however concerned about his future. “My father expressed his worries and talked about my singing to a veteran violinist and friend Vid Veerabhadrayya.

In response, Vid Veerabhadrayya took out one instrument from his music shop, Aruna Musicals in Balepet,” he says. It was a flute and he gave the flute to Mahesh’s father and asked him to give it to Mahesh. Mahesh started practising and train himself and became well versed in playing film songs. He won many college level competitions by playing film songs. While attending a concert at his grandfather’s place, veteran flautist, Vid. V Prakash who was performing that day suggested that Mahesh learn the flute formally under a guru. He then took training under Vid MS Srinivasa Murthy, a popular artist. Mahesh’s introduction to the morching was through his friend, G Omkar, who himself plays the instrument. He asked his friend to lend him the instrument for two days.

He brought the instrument home and was fascinated with it and learnt it. “I accompanied morsing artist to their concerts,” says Mahesh. Mahesh has played in Kannada movies and has composed a lot of krutis and varnas needed during classical dances. He has also been on several tours to USA, Europe and Asia performing his original compositions with the acclaimed dance group, Shakti Dance Company- Los Angeles. “Music might be entertainment in other countries but I feel music in my country is a way to achieve salvation. When I sing the notation ‘Sa’ it gives me a feel of divinity a n d the satisfaction and enjoyment we as artists get by singing should also be experienced by the audiences,” says Mahesh.

Now we are on Telegram too. Follow us for updates
TAGS
Music Carnatic classical flautist salvation