Two decades after, quadrupling of railway line from Bengaluru to Whitefield okayed

BENGALURU: Nearly 4 lakh people, a majority of whom are IT professionals who commute from the City to Whitefield daily can look forward to a comfortable travel to their workplace two to three years down the line. Two decades after the move to improve rail transport towards the Whitefield area was first proposed by the Bengaluru Railway Division, the Railway Board gave the green signal for it on Tuesday (March 20).

Two railway lines running to 18.95-km each between Bengaluru Cantonment and Whitefield have been approved at a cost of Rs 492.87 crore. The lines will come up on either side of the existing two lines, said an official railway release. There are four railway stations between these terminating points: Bengaluru East, Baiyappanahalli, Krishnarajapuram and Hoodi.“This will benefit 62,000 daily commuters in this section and make commuting within Bengaluru easy and fast,” the release said.

The original route proposed in  1997-1998 was between KSR station (Bengaluru City) and Whitefield. It was even sanctioned in the Railway budget. “However, land could not be acquired in the prime portion between KSR and Cantonment stations as residential houses and multi-storeyed buildings figured enroute and the acquisition costs were enormous,” said a railway official.

The state government had also appealed to the Ministry of Urban Development to share the costs but the ministry turned it down as the Metro could cover it. Hence, the project was shelved in 2013 but later revived in 2017 with the shift of the line from KSR to Cantonment station. Of the 240 trains that depart from Bengaluru (146 trains from KSR and 94 trains from Yesvantpur), 122 trains are suburban in nature with many running between Bengaluru and Whitefield, the release said.As many as 26 suburban services have been introduced, including four services between Bengaluru and Baiyappanahalli. 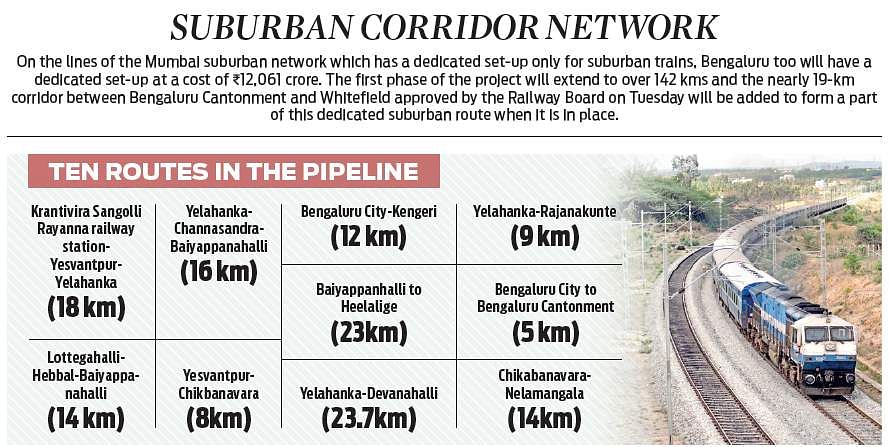 Stay up to date on all the latest Bengaluru news with The New Indian Express App. Download now
TAGS
Techie IT professionals Bengaluru Railway Division Bengaluru to Whitefield