On Sunday, citizens will take law into their own hands by breaking concrete footpaths that suffocate trees in Jeevanbheemanagar.

BENGALURU: Hemant K, founder of Save Green, and his group, have decided to take an extreme step by breaking concrete footpaths that suffocate trees in Jeevanbheemanagar, due to the lackadaisical attitude of Forest Department authorities. What’s more interesting, is that the group has gotten approval from mayor Sampath Raj, who tells City Express that the move makes 'common sense'.  “At least two-feet of space must be given or the tree will die slowly. There must sufficient mud around the tree so water reaches the roots.  Even if we tie a rope or an iron wire around the bark, wood takes that shape, thereby biting into its skin. We will start this initiative at Jeevanbheemanagar, and spread it to other areas eventually,” Hemant tells City Express.

Using hammers, pickaxes and other tools, the group plans to break the cement that's harming trees, clean up debris, loosen mud and add manure to the soil. The group also observed that commercial shops put the concrete around trees themselves, making place for their customers to sit, unload the shop’s goods, and other activities. 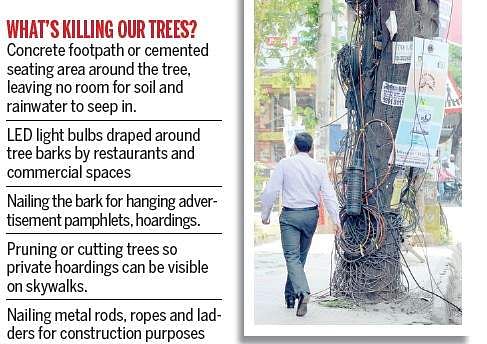 The group has spent the last two years removing advertisement posters stapled or nailed to trees, filing police complaints and even taking violators to court. The Forest Department looks away, they say.

“We did a survey in November 2017 in around eight areas of the city. We found that more than a 100 trees were being killed due to footpaths, cut for visibility of hoardings, nailed with iron rods for construction purposes and decorated with LED light bulbs by restaurants,” says Hemant, adding that nothing much has changed since then.

Hoarding, posters and LED bulbs, will also be voluntarily removed by the group on Sunday. The areas surveyed by the group were Kundanahalli, Marathahalli, Bellandur, Indiranagar, Sheshadripuram, Old Airport Road, Domlur and Jayanagar, near Ashoka Pillar.While the group seems to have support from political leaders, they feel that the lower rung officials do not seem keen to put an end to this. Ashwini, a member of Save Green says, “Forest Department officials promise to take action, but do not support us. I have a bundle of complaints on this issue, which I have filed over the past nine years. Till date, none of these have been resolved.”

'Obstructing' trees cut and pruned
The skywalks built by the Bruhat Bengaluru Mahanagara Palike (BBMP) itself are covered in hoardings, for which the 'obstructing' trees are often cut or pruned. The group claims to have confronted the Forest Department about the same issue at Murgeshpalya Skywalk.An absurd excuse heard by the citizens was that the revenue from advertisements helps the BBMP cover electricity costs incurred by operating the lift in the skywalk.

Another case in point, is the tree near the skywalk connecting India Gandhi Musical Fountain park and Jawaharlal Nehru Planetarium on Raj Bhawan road. One can clearly see the tree is pruned near the park, standing in front of a line of private advertisement hoardings. “Private companies come at midnight with their trucks, cut or prune the tree covering their hoardings. Within minutes, they will do this and walk away scot-free. Another issue we have faced is the constant change of the mayor and other BBMP officials, which forces us to repeat our efforts when the new authority takes office,” Ashwini adds.

Stay up to date on all the latest Bengaluru news with The New Indian Express App. Download now
TAGS
Trees footpaths Save Green Jeevanbheemanagar