The gauge at Doddabanahalli near Aavalahalli in Bengaluru East recorded 21 mm of rain, while the one at Yelahanka recorded 16.5 mm.

BENGALURU: Bengaluru experienced thundershowers on Friday evening, which led to at least 13 trees getting uprooted across the city. KR Puram and its surrounding areas experienced the heaviest rainfall in the city. As per the Karnataka State Natural Disaster Monitoring Centre’s (KSNDMC) website, 80 mm per hour of rain was recorded at 4.30 pm. The weather helpline, Varuna Mitra, said the gauge at KR Puram recorded 46 mm of rainfall. The gauge at Doddabanahalli near Aavalahalli in Bengaluru East recorded 21 mm of rain, while the one at Yelahanka recorded 16.5 mm. 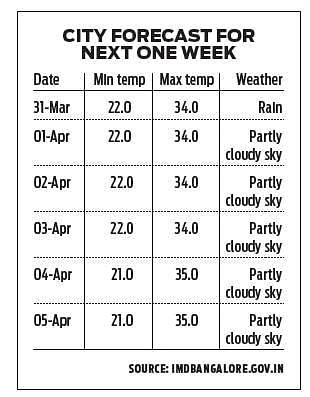 According to multiple tweets, ITPL and Whitefield received hailstones. The BBMP control room said that trees fell across the city, including Malleswaram and on Old Airport Road. A falling tree caused two electric poles to collapse at Banaswadi. However, no injuries were reported from these incidents.

KSNDMC Director Dr GS Srinivasa Reddy said the current rainfall was due to a trough formed in the atmosphere from over Maharashtra and extending up to Chennai, and passing through Karnataka. “There is thunderstorm activity and convective clouds are getting formed, which happens when the temperature increases. This phenomenon is common in the pre-monsoon period, and will bring down the temperature by 3-4 degrees,” he said.

The forecast indicated that the rainfall would continue until April 7 or 8, but the forecast’s accuracy was more for the next three days, Reddy added. On Friday, several districts in south interior Karnataka, including Bengaluru Rural, Bengaluru Urban, Kolar, Chikkaballapur, Tumakuru, Mandya, Mysuru, Kodagu and Hassan received isolated to staggered rainfall. The state has greatly exceeded the ‘state normal for the month of March’, which is 8 mm, Reddy said. “Excess rainfall has been recorded in 24 districts, and only the Hyderabad-Karnataka region has received low rain,” he said.