Can we put a price tag on planet earth?

BENGALURU:Translated from Manoj Mitra's Bengali play, Shajano Bagan, which was originally written in the 1970s, Blooming Orchard is relevant today, as it was over 40 years ago. The play, on the Zamindari system, has a rural setting and depicts the rise of the underprivileged as they turn the tide against feudal, upper-class landlords after the post-independence abolition of the Zamindari system.

In The Blooming Orchard, elderly man Banchha owns a beautiful orchard and is every neighbour’s envy. Everyone lays claim to the land-- from Banchha’s greedy grandson, eager for an easy inheritance, a ghost of a zamindar who has been trying to acquire the land for decades, and everyone in between. Finally, it’s the ghost’s son --- the conniving

Nakori Dutta --- who makes Banchha an offer he simply can’t refuse. It’s a small monthly stipend for Banchha, who is hovering at death’s door. At death, ownership of the land is given to Nakori. But there’s one problem - the old man refuses to die. 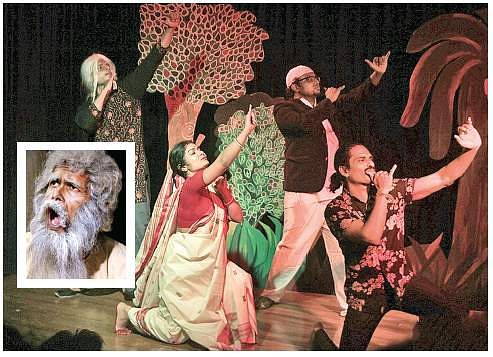 Sagnik Sinha, who has been associated with the play for a year, and plays the character of Nakori explains: “The character’s father used to be a zamindar and would command a lot of respect. Once the zamindari system got abolished,they retained the status, command and respect. But wealth wise their coppers seemed to dwindle a bit. Now this zamindar turns into a land shark who tries to catch hold of someone’s fishery or orchard or plantation. And he is after Bansharam's orchard. Likewise he strikes a deal with 95-year-old Bancha, offers to pay `200 per month for the Orchard, provided that once Nakori dies, the Orchard is his. So when Nakori refuses to die, the Zamindar gets frustrated.” "Nakori is a funny guy treating everyone names. He goes around insulting everyone. He’s one of the cranky person’s in the comedy play."

Director of the play, Ranjon Ghoshal, says that it’s a play that questions the fact whether the earth that feeds us all can really have a price placed on its head. “And if a price is placed, is that really what's best for everyone? Starring an eclectic collection of colourful characters, the play takes a look at what it means to hold on to what's important," says Ghoshal.

What: The Blooming Orchard