Had grace marks not helped about 20,000 students of the 8.56 lakh who appeared for SSLC exams in 2018, the pass percentage would have dropped by about 2 percent.

BENGALURU: Had grace marks not helped about 20,000 students of the 8.56 lakh who appeared for SSLC exams in 2018, the pass percentage would have dropped by about 2 percent.

Despite the state primary and secondary education minister Tanveer Sait saying several times that the department had done away with the practice of giving grace marks to pass students, the Karnataka Education and Examination Board (KSEEB) said it had gone ahead and granted grace marks for students needing them in SSLC exams 2018 with which at least about 20,000 students passed — which is about 2 percent of the total number of students who appeared for the exams.

Dr Reju MT, commissioner for department of public instruction said, "The students who have difference of less than 5% for the passing marks have been given grace marks and as per the rules it is allowed to give grace marks of up to 5% in two subjects."

There are two types of grace marks: one will be given during the evaluation in case if there are wrong questions, errors or any out-of-syllabus questions; the other type of grace marks is given at the stage of tabulation wherein a student needs lesser than 5% to pass the exams. For example, if a student secured above 50 in other subjects and secures 25 in one particular subject, in that case that particular student is awarded 5 marks and allowed to pass.

Rural students enjoyed a pass percentage of 74 compared to 69.3 among urban students in the state. This goes against a general assumption that urban students, given the accessibility to various facilities, could be doing better, but the rural students have beaten that assumption.

Soon after the announcement of results at around 11am on Monday, the authorities concerned at the board started sending the results of candidates via SMSes to the registered mobile number of the parents. This was a new initiative by the KSEEB. However, the results were even available online and candidates could get their results by logging on to htttp://sslc.kar.nic.in and http://karresults.nic.in. The same will be announced at respective schools on Tuesday by 1pm.

LESS A+ GRADES THIS YEAR

Apply for revaluation by MAy 21

Udupi district managed to hold the top place which it had secured even during 2017 exams. Yadgir stood at 34th place, down from 16th place last year. Pass percentage was just 35.54. 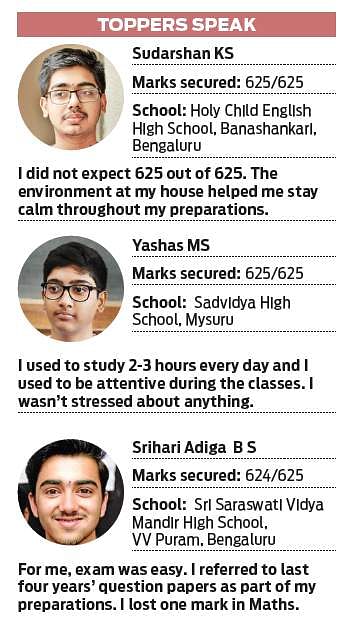 Sixteen-year-old-boy Mansu, who was once a ragpicker, has now secured 78% in his SSLC examinations. Mansu hails from a village called Ramasamudra in Yadgir district. Few years ago, his family migrated to Bengaluru to work at construction sites, while he became a ragpicker. In 2013, a representative of an NGO saw Mansu and rescued him. “Expressing his happiness, Mansu said he wants to become a Chartered Accountant and will take up commerce. Mansu studied his class 10 from BBMP school  in Shivajinagar in Bengaluru.

Securing 623/625 and being one among the third toppers in the state was not an easy job for Dhanalakshmi V. Being a daughter of Pourakarmika, she did not expect to secure such high marks. Despite financial crisis, family support was the only encouragement for her to achieve this much. Considering the financial crunches, she decided to avail free education by clearing the Entrance test at RK Visions school at Chikkaballapura and completed her high school free of cost. “I would like to take up civil services. I will take up science, my aim is to join IIT for under-graduate course and later take up IAS,” she says.

Another achiever who was a rescued child labourer, secured 89% in her SSLC. Nagarathna, who was rescued from a construction site in the city by Sparsha NGO. As she was interested in studies, the members of Sparsha Trust admitted her directly to class 6 at a nearby government school. Looking at her scores and interest, they admitted her to an English-medium high school. “In the beginning, it was difficult for me to cope with English-medium teaching, but I engrossed myself in it and studied hard. I would like to become an IAS  officer,” she said.

Udupi district managed to hold the top place which it had secured even during 2017 exams. There are a few districts which went down the list with least pass percentage. Yadgir's performance even upset the authorities where it has gone down from last year's 16th place to 34th this time. The pass percentage stood at just 35.54, which was 74.84% last year. Even Gadag, Chamarajanagar, Kodagu, Ramanagara and Chikkamagaluru failed to put up a good show.

DISTRICTS THAT SLIPPED ON RANKING

Now we are on Telegram too. Follow us for updates
TAGS
students SSLC exams