BENGALURU: Using Metro trains to get back home after late night IPL matches in the City is slowly gaining in popularity. Ridership for the five matches which have been completed has shown a 41 per cent increase over the corresponding period last year. Metro train services were extended from 11 pm to 12.30 am on all match nights.

While the overall ridership figure for the opening five match days in 2017 was 38,496 commuters, the corresponding figure for 2018 is 54,010 commuters. The opening up of connectivity between the Purple and Green Lines by providing connectivity at the Kempe Gowda Interchange station in June last year is believed to have played a crucial role in this.

Nearly half of those coming over to watch the matches bought the paper tickets which cost Rs 50 for a return fare to any destination from Cubbon Park and M G Road Metro stations.

The services are not being viewed from the profit point of view by BMRCL.

BMRCL Managing Director Mahendra Jain told The New Indian Express, "Operation of trains during the extended hours is not commercially viable. However, in the interest of our passengers and due to requests from them, these services are operated on special occasions."

The Corporation had for the first time reported an operational profit of Rs 40 lakh per day for the six months from November 2017 to April 2018. Metro trains clock an average ridership of 3.8 lakh per day on both lines. 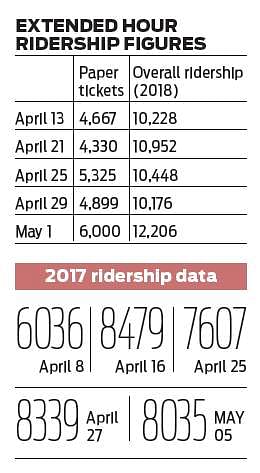 Now we are on Telegram too. Follow us for updates
TAGS
Metro trains IPL