Hues and shades of Varanasi in Bengaluru

It takes just four to five hours for Pune-based artist Anand Bekwad to paint landscapes. This, because, he feels doesn’t require any sort of creativity.

BENGALURU: It takes just four to five hours for Pune-based artist Anand Bekwad to paint landscapes. This, because, he feels doesn’t require any sort of creativity. “It’s just about replicating the view on the spot,” he says,  Creativity takes courage, he says.  “For abstracts, it usually takes me anywhere between five days to several months to complete just one painting.  Being creative takes time,” he says.

The 42-year-old artist prefers to paint landscapes in the evenings. “Most of my paintings are done during dusk when the shades in the sky are orangish red, and the shadows on the landscape create hues that are hard to ignore. It looks very vibrant. During the noon as the sun is right above the subject, the scope of using more colours is reduced,” he says adding that sometimes, he prefers to take some liberty and use other colours according to his mood and what he thinks would work the best. This helps him transform the landscape in such a way that it tends to appear as an abstract work. 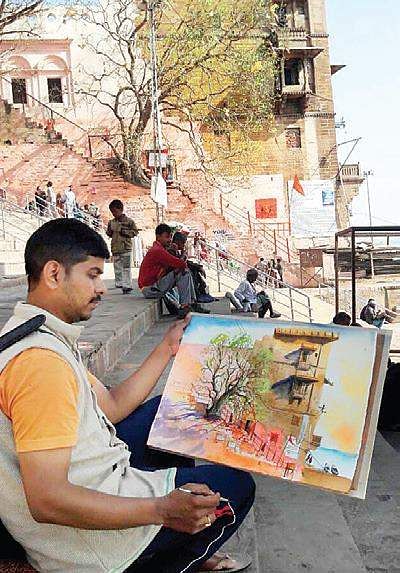 Anand started out as a landscape painter before he began experimenting with the abstract style, and then turned to nature. He draws his inspiration from his travels, too. He is highly inspired by the beauty and calmness that the sacred city of Varanasi offers him. Crowning the city is the Ganges ghat that drew Anand to paint one of his popular paintings ‘Bygones’ with strokes of orange and redish yellow. He tries to portray emotions one holds for this sacred city.

An enthusiastic traveller and a nature lover, Anandhas been painting for the last 18 years. “Nature is something I deeply connect with. Whichever city I travel to, I try painting their structures and capturing them with my brush.” He uses watercolours, acrylic colours and oil paints. His interest in art started at the age of seven, when he started participating in school competitions.

To pursue his passion, he  studied diploma in drawing and painting in Belgaum. Anand is a recipient of several awards including the Karnataka Lalitha Kala Acadamy Awards, Mysore Dasara Award and 64th all India Exhibition Award.Anand will be showcasing his six paintings inspired by Varanasi along with six other painters at Karnataka Chitrakala Parishath, Kumarakrupa Road, till May 16.