Surf photography: Splash with a flash

Water as a subject is quite different from other subjects of photography...

BENGALURU: It’s quick, it’s impulsive, and it’s uncertain. And that’s what appeals to Rammohan Paranjpe, a surf photographer from the city, who claims to be the only one in India. “Unlike other genres, in surf photography you cannot plan a shoot. You need to adapt to the environment to get results, says the 29-year-old photographer.

The unpredictablity factor, Rammohan, explains, only adds to the thrill of his passion, now turned into a profession.  “You have no control over the sea or the lighting. Which makes getting the best actions shots a challenge,” he says. 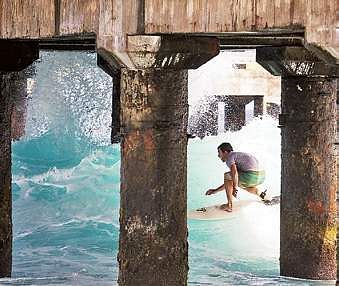 Water as a subject is quite different from other subjects of photography, he believes. When he was surfing in Fiji at one of the most dangerous surfing spots in the world, he recalls getting ‘slammed by a rough wave’. “I got caught in the wave and the currents were pulling me in. I lost my fin. That episode shook me, and I realised how dangerous my line could be especially since the sea is ever-changing,” he recalls.
Rammohan hasn’t undergone any formal training in photography.

Neither has he attended any workshops. A self-taught photographer, Rammohan has come to realise that a passion for the sport in addition to good swimming skills, are mandatory to tick in the line. “It is different from underwater photography. For that, you need not know how to swim since there’s a back up for oxygen. Here, although you’re on the surface, you’re also in the middle of the sea and hence, you need to be a skilled swimmer. Being well-versed with the sea is only a bonus,” he says.

In his photography, Rammohan attempts to blend in the culture of the place. For example, he takes certain shots of fishermen and of them casting their nets, he tells us, adding that some of his best clicks are those he took in Lakshwadeep and Andaman and Nicobar islands, which was in fact the place he realised his interest in surf photography. I actually started pursuing surf photography there inspired by the entire journey in Andamans in 2007,” he recalls, adding, “The combination of the blue waters and the rustic feel of the place was fabulous.”

Though Rammohan specialises in surf photography, he’s also into adventure sports photography, remote travel photography and cricket photography. “Since I wanted to create a niche for myself, I realised I could do it by focusing only on surfing,” says Rammohan, who has been into this for over 10 years.

Rammohan was first introduced to surfing and photography by his friends who were ‘first-generation surfers’ in Mangaluru. “I dropped out of my 1st PU as I did not want to pursue a formal education. Ever since, I have been into surfing and it’s allied activities. Initially, my family was apprehensive, but now that they have seen me come this far, they are more accepting,” he says. His next mission: Working towards the development of the sport in India.

What’s in his bag?

Now we are on Telegram too. Follow us for updates
TAGS
surf photography