Desperate to get funds to finance his debut film, a Kannada film director allegedly resorted to extorting money from a married couple.

BENGALURU: Desperate to get funds to finance his debut film, a Kannada film director allegedly resorted to extorting money from a married couple. He ended up in the Central Crime Branch (CCB) net along with three of his associates. The ambitious director, N Santhosh Kumar, 27, allegedly blackmailed the couple by demanding Rs 5 crore after capturing video clips of their private moments while on an outstation trip and threatening to send the clips to their family members or post them videos on various websites.

The scared couple, a real estate businessman and his wife, initially paid up Rs 1 lakh in cash to Santhosh, but when the latter persisted on him paying up the entire Rs 5 crore, the victim and his wife complained to the Kengeri police, their jurisdictional police, who transferred the case to the CCB, who swung into action.

They arrested all the four, including the Kannada film director, on charges of extorting Rs 1 lakh from the couple. Apart from Santhosh, the other three have been identified as his driver Prashanth (26), and their friends Suresh (24) and Pradeep(22), all natives of Chamarajnagar. 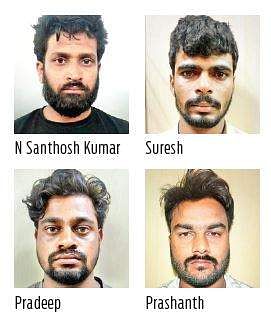 A police officer said the Santhosh had befriended the couple two years ago. Santhosh and his associates stolen a video that contained private moments of the couple. The video was taken when the accused had gone on an outing with the couple and a few friends a few months ago.

Santhosh had then threatened that he would upload their private video online, and demanded `5 crore cash from them.

The drama began about nine months ago when Santhosh took the couple to a neighbouring state for a trip along with a group. After returning from the trip, Santhosh had asked for the complainant's mobile phone to transfer some photos of him captured during the trip and found private videos of the couple. He immediately downloaded it and stored it in his laptop.

Since Santhosh planned to direct a film named Mysooralli Raja-Raani, he had approached the husband to invest in his film as he was earning well in his business. But the victim had ignored Santhosh's offer and started avoiding him. Upset over this, Santhosh allegedly sent the stolen video to the couple’s mobile phones and threatened them that he would share those videos with their family members and on various websites.

On May 16, he repeatedly contacted the complainant and settled the issue by asking them to pay `5 crore in cash. However, the couple paid only `1 lakh and approached the jurisdictional police station with a complaint. The case was then referred to the CCB police, who nabbed the gang on May 18.

During interrogation, Santhosh confessed to the crime and his laptop and SIM cards were seized. Sathosh and his driver Prashanth stayed together in a rented house and the duo had planned the extortion. Prashanth had stolen the SIM cards from his friends to send videos to the couple through WhatsApp, so their numbers couldn’t be traced.

Santhosh had worked as an associate director for a couple of Kannada movies and TV serials for a few years. Recently, he had called a press meet to announce his film as a debut director, Mysooralli Raja-Rani, and wanted money for the production. He was also a member of Human Rights Organisation to extort people. He was also involved in the murder of his mother in-law, and was arrested by Mysore police in 2010.

Now we are on Telegram too. Follow us for updates
TAGS
blackmailing Extortion