The country’s third largest airport is going all out to ensure that its expansion plans are not sidetracked in the next two- three years.

BENGALURU: The country’s third largest airport is going all out to ensure that its expansion plans are not sidetracked in the next two- three years. With passengers clamouring for a new terminal and the need to build a second runway becoming more urgent, work is on in full swing to ensure that the airport will be able to deal with the capacity. A second runway will be operational by the end of 2019 and work on terminal 2 is under way. The T2 terminal will be a massive capacity add-on to the KIA with 2.54 lakh sq metres to be commissioned in the first phase and 4.41 lakh sq metres in the second phase. At the end of the second phase, the airport will be able to cater to 65 million passengers per annum.

In addition to the major infrastructure improvements, a lot of other smaller projects are underway. “We are also working on more basic improvements to the passenger experience. For example, biometric and paperless check-ins. The focus is on simplifying travel and this will be an important target for us in the coming year,” Hari Marar told The New Indian Express.

In addition, the BIAL is also working on providing retail, food and beverage experiences. “A lot of experiences will be available only at KIA once we have them underway. We want to make the airport campus a hustling, bustling area and we are going beyond core airport operations,” he added.

Also in the offing is plans for an aerotropolis to be developed around KIA. The airport city will have shopping malls too.

Second runway by 2019
Terminal 2 to be ready in two phases
Biometric and paperless check-ins
Better retail, food and beverage experiences
Aerotropolis around airport 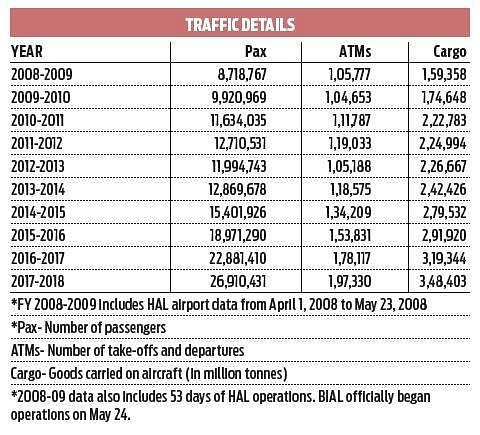 Now we are on Telegram too. Follow us for updates
TAGS
BIAL