Photographer reflects solitude in his pictures

Without having any conversation with his subjects, he is able to imagine a story on each one of them.

BENGALURU: The elaborate architecture and wide streets of scantily populated Berlin in Germany pushed photographer Sandeep TK to begin reflecting upon the self and understanding the meaning of solitude. The series of photographs that he clicked at the spot captures the emotional state of mind he was experiencing at the time - of separation and a bitter heartbreak. 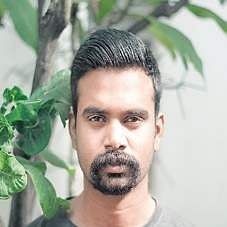 Without having any conversation with his subjects, he is able to imagine a story on each one of them. He connects them with his personal life. One of his photographs shows an empty chair in an open field. Explaining this, he says, “When someone sits on it, it feels like it is owned by someone. And when it is empty, it seems like it is longing for someone. I had a chair in the house when I was living with my boyfriend. When we broke up, that chair was the only thing I wanted to take.”

He says, “I got a scholarship for a residency programme at Lichtenberg Studio in July 2017 for three months. My idea was to work on rainbow families (same sex partners who are into parenting). I would get a gap of two to three days between each shoot. Hence, I would go out and click pictures of single human beings in the vast landscape.” He adds that many people do not talk about their fears as they are not comfortable to show their vulnerable side. “I was speaking to my friend over beer and she told me about how her boyfriend left her for another woman. She doesn’t prefer to talk about it much though. So one doesn’t know what goes on in one’s head,” he shares.

The series also includes a short video. He says he’s also put to display, the very first love letter he received from his boy friend and the last text he received from him when they broke up. He hopes to initiate a dialogue about homosexuals through this work. “Our society is still conservative. My friends and family know that I am into men, they just don’t talk about it,” he signs off.The exhibition is on till November 16 at Gallery Sumukha, Wilson Garden.

Stay up to date on all the latest Bengaluru news with The New Indian Express App. Download now
TAGS
Sandeep T K photography