The country recently witnessed the highest number of deaths due to trespassing on railway tracks.

BENGALURU: The country recently witnessed the highest number of deaths due to trespassing on railway tracks. At least 60 Dasara revellers lost their lives after being hit by a train in Amritsar. Unfortunately, trespassing on railway tracks is nothing new in the country, let alone Bengaluru. Statistics furnished by Railway Protection Force (RPF) reveal that 194 deaths have taken place this year up to September, in the city. This comes up to 21 deaths a month. “The maximum deaths have occurred along the Bengaluru-Kengeri railway tracks,” a senior police officer said.

This year has seen 675 trespassing cases booked so far with Rs 2,69,350 collected as fine. Though deaths specific to trespassing alone are not gathered by the RPF, the stretch up to Kengeri is proving to be a death trap. A total of 123 people have lost their lives on these tracks for reasons that include trespassing, suicide and fall from trains due to footboard travel.

Senior Divisional Security Commissioner, M Suresh, told The New Indian Express, “We keep on conducting awareness drives and repeatedly crack down on offenders. However, it depends on the individual to heed our warning.”

The RPF had booked 904 trespassing cases in the 15 railway stations, where the police force had a presence, in 2016. Bangarpet topped it with 250 cases. In 2017, the figure rose to 1,109 cases with Hindupur topping and Bangarpet coming second, said another official.

Explaining the procedure involved,  a top official said that whenever a trespasser is spotted, he is taken to the RPF police station. After filing a case, the individual is produced at the Magistrate court on Nrupatunga Road.  Some areas have a Railway Court but Bengaluru presently does not have one, he added.

“While the fine levied in Bengaluru for a trespassing offence ranges between Rs 300 and Rs 500, even a sum like Rs100 is levied in stations falling on the outskirts. It all depends on the magistrate,” he said. 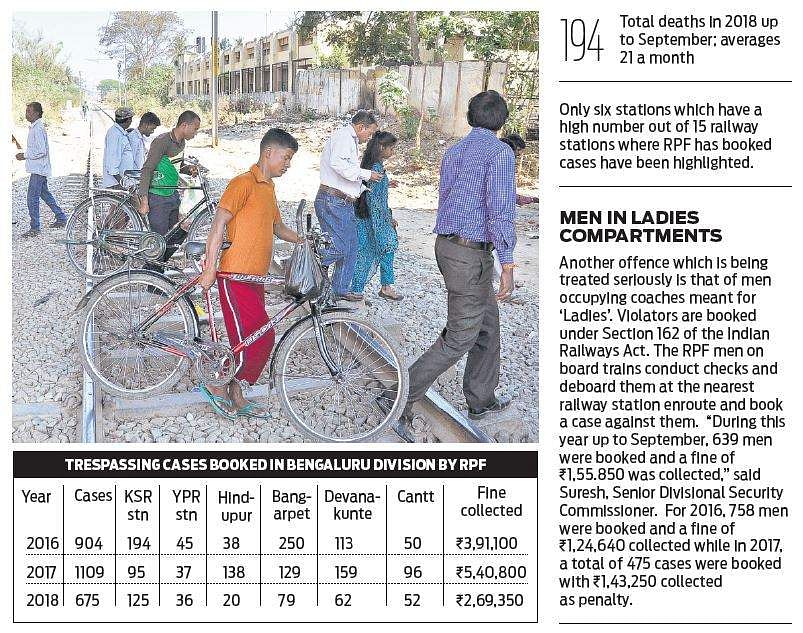 Now we are on Telegram too. Follow us for updates
TAGS
Train accident Bengaluru Banglore