But the Bangalore Water Supply and Sewerage Board (BWSSB) stated that it is due to residential houses encroaching on these lines.

BENGALURU: The fight by the residents of Ejipura against sewage lines being clogged and flooding residential compounds seems never-ending. Residents had complained about the interconnection of sanitary and water pipelines. But the Bangalore Water Supply and Sewerage Board (BWSSB) stated that it is due to residential houses encroaching on these lines. 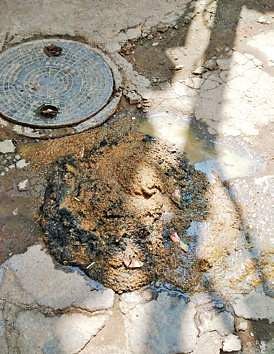 Janet Yegneshwaran, a resident in Ejipura and an RWA member, said she has been complaining to BWSSB for over a week about this drainage block in front of her residence at 20 M Cross Road. “The drainage line is clogged and the sewage water enters my residential compound. They have removed the muck out of it after complaints but left it next to the drain in front of our houses. I am not sure whom to call to get it cleared now,” she said adding that the locality is now stinking. “I have been living here for 25 years. This is the first time this is happening,” she said. One of the main reasons for water getting flooded is that the area is low lying, she added.

“The problem started after a PG started running in this area. They throw solid waste into the drain causing blockage,” she said. The owner of Glorious PG, Shivashankar Joshi, admitted that there is a drainage problem but he said he is not aware of solid waste being dumped in it by his PG occupants. “The corporation is collecting all solid waste from the PG,” he said.

Nagaraj A, BWSSB assistant executive engineer, said that they are working on a new sewage line and residents may face drainage problem until work is completed. “The work for the new sewage pipeline may take a year and until then, drainage issues may continue to arise,” he said.

Now we are on Telegram too. Follow us for updates
TAGS
Bangalore Water Supply and Sewerage Board BWSSB